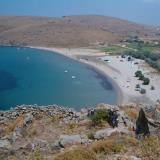 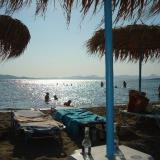 The village of Moudros until 1914 constituted a municipality. It still is the economic center of eastern Limnos. The village is first referred to in 1355. Around 1380 it belonged to the Monastery of Vatopedion of Mount Athos. During the 18th century two castles were preserved here. The one of Moudros and another one given to the Monastery of Vatopedion in 1362 by the Great Military Commander of Limnos, Georgios Astras. Today two churches exist in Moudros: Taxiarches, probably built in 1370 and Evangelistrias, built in 1904. Moudros owes its importance especially to the port. It is one of the best natural ports in the Mediterranean if not the best. The gulf of Moudros protected from the northern winds and the streams coming from Dardanellia, is navigable even by large ships. During the Balkan wars, the gulf was used as a starting point from Pavlos Koudouriotis. During 1914-1916 it constituted one of the nautical bases for the alliances in the enterprises of Kallipolis and those of Dardanellia. Moudros also served as an anchorage for about 500 ships and as much as 30.000 soldiers camped here. Their presence contributed to the trade flourish. Coming out of Moudros, on the road to Roussopouli, is the alliance cemetery. Many victims of the 1st World War were buried here in clusters depending upon their nationality.
This text (extract) is cited June 2003 from the Lemnos Provincial Government tourist pamphlet (1997).