It is one of the most important prehistoric settlements of the Aegean. The first habitation at Akrotiri dates from the Late Neolithic times (at least the 4th millenium BC). During the Early Cycladic period (3rd millenium BC), a sizeable settlement was founded, and in the Middle Cycladic period (ca. 20th-17th centuries BC) it was extended and gradually developed into one of the main urban centres and ports of the Aegean. The large extent of the settlement (ca. 20 hectares), the elaborate drainage system, the sophisticated multi-storeyed buildings with the magnificent wall-paintings, furniture and vessels, show its great development and prosperity. The various imported objects found in the buildings indicate the wide network of its external relations. Akrotiri was in contact with the Minoan Crete but also communicated with the Greek Mainland, the Dodecanese, Cyprus, Syria and Egypt. The town's life came to an abrupt end in the last quarter of the 17th century BC when the inhabitants were obliged to abandon it as a result of severe earthquakes. The erruption followed. The entire island and with it the prehistoric town of Akrotiri were buried unter the volcanic materials which covered the buildings and their contents, like a protective shield, as in the case of the Roman Pompei.

Evidence of habitation at Akrotiri first came to light in the second half of the 19th century. The systematic excavations began in 1967, by Professor Spyridon Marinatos under the auspices of the Archaeological Society at Athens. He decided to excavate at Akrotiri in the hope of verifying an old theory of his, published in the 1930's, that the eruption of the Thera volcano was responsible for the collapse of the Minoan civilization. Since his death in 1974, the excavations have been continued under the direction of Professor Christos Doumas. No interventions are made on the uncovered monuments unless it is necessary for their consolidation or for the preservation of the evidence, including information concerning the destruction of the settlement.

The most important buildings of the site are:
- Xeste 3: Large edifice, at least two-storeys high, with fourteen rooms on each floor. Some of the rooms were connected by multiple doors and decorated with magnificent wall-paintings. In one of them there was a "Lustral basin", which is considered a sacred area. The most interesting of the frescoes are the ones of the Altar and of the Saffron Gatherers. The former depicts three women in a field with bloomed crocuses and an altar, and the latter, female figures engaged in collecting crocuses which they offer to a seated goddess, flanked by a blue monkey and a griffin. Judging from the rchitectural peculiarities of the building and the themes of the frescoes, one may conclude that Xeste 3 was used for the performance of some kind of ritual.
- Sector B possibly comprises two separate buildings, the one attached to the other. From the first floor of the western building, came the famous wall paintings of the Antelopes and the Boxing Children. The eastern building yielded the fresco of the Monkeys, a composition of monkeys climbing on rocks at the side of a river.
- The West House is a relatively small, but well-organized building. In the ground floor there are storerooms, workshops, a kitchen and a mill-installation. The first floor is occupied by a spacious chamber used for weaving activities, a room for the storage mainly of clay vessels, a lavatory and two rooms, the one next to the other, embellished with magnificent murals. The first was decorated with the two frescoes of the Fishermen, the fresco of the Young Priestess and the famous Flotilla miniature frieze. The latter ran around all the four walls and depicted a major overseas voyage, in the course of which, the fleet visited several harbours and towns. The final destination of the fleet with the rocky landscape, the configuration of the harbour and the multi-storeyed buildings is identified with the port of Akrotiri itself. The walls of the second room were decorated with a single motif which was repeated eight times. This motif is identified as the cabin at the stern of the ships depicted in the miniature frieze.
- Complex Delta ncludes four houses. A room of the eastern building is decorated with the Spring fresco: the artist represented with special sensitivity a rocky landscape, planted with blossoming lilies, between which swallows fly in a variety of positions. Tablets of the Linear A script have recently been found in the same building. All four buildings yielded interesting finds such as abundant imported pottery and precious stone and bronze objects.
- The House of the Ladies. The large, two-storeyed building was named after the fresco with the Ladies and the Papyruses, which decorated the interior. The most interesting architectural feature of the building is a light-well constructed at its centre.
- Xeste 4 is a magnificent three-storeyed building, the largest excavated up to now. All its facades are revetted with rectangular ashlar blocks of tuff. The fragments of frescoes that have so far come to light belong to a composition which adorned the walls on either side of the staircase at the entrance of the building, depicting life-size male figures ascending the steps in procession. It was in all probability a public building, judging from its unusually large dimensions, the impressive exterior and the decoration of the walls. 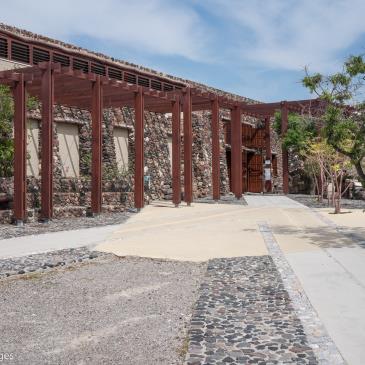 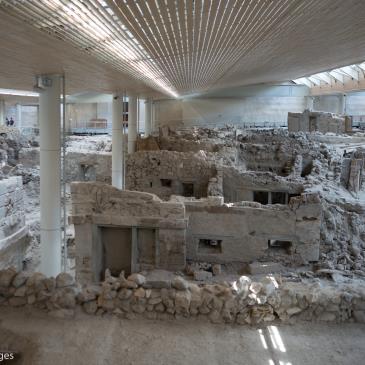 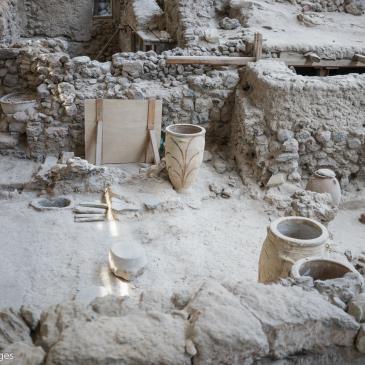 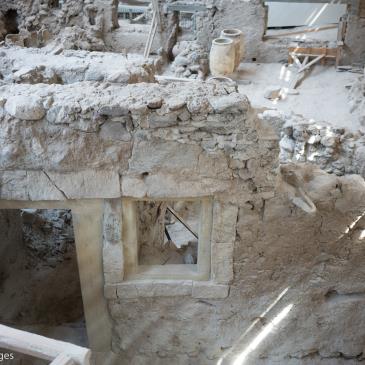