An ancient city, city state and home of the Esperian (western) Locris with 70,000 people (according to the Greek traveller Pausanias - A.D. 180). It owes its name either to the daughter of Makaros (son of Aiolos) Amfissa or to a Greek verb "αμφιεννυμι" (=to surround-to dress with), because it is surrounded by mountains. In 338 BC, during the Third Sacred War it was ruined by Phillip II of Macedonia. In 30 BC the city was colonised by Aitolians and became very populous. During the later Byzantine period it was renamed to Salona and at the Middle Ages it was invaded by the Franks who established the Salona Barony (Salona Barony - La-Sola, under the dynasty of Stromonkur).
At the 1821 Struggle for Freedom, it was the first city of Roumeli to revolt under the leadership of Panourgias, Gouras and Isaiah, bishop of Salona. On March 27 Panourgias invaded the city and on April 10th Salona Fortress was invaded. Salona (Amfissa) became the capital of Eastern Terrestrial Greece following the establishment of Salona Aeropagus,where the Resolution of Eastern Terrestrial Greece Constitution was adopted.
Today, Amfissa is the capital of Fokida department, numbering 12,000 inhabitants, centre of all Public Services. There is a modern State Hospital, a Court of First Instance, a Cultural Centre, a Prison, an Archaeological and a Cultural museum, a Public Library with 40,000 volumes which is constantly enriched, City Band and Chorus, Municipal Conservatory and Artistic Workshop, Cultural and Athletic Clubs. In the city, there are also Technical Professional Institutions (Tourism Department), Highschools, Primary Schools, Nurseries and other Educational and Professional Institutions.Despite the passage of time, there still survive traditional manufactures: Tanneries in the traditional neighbourhood of Harmena, bell and rope making industries. Amfissa is well known for its notable cultural events (Fokika, carnival). The visitors should visit the monuments of: The Annunciation Cathedral, the walls of which areadorned with mural paintings of the famous painter Spiros Papaloukas, the Salona Fortress (Orgia), the acropolis of Amfissa with ruins of all kind of architectural styles.
Not far away, there is the "Sotiros" Church (Church of the Saviour), a magnificent piece of art, a byzantine church (11th or 12th century). At the base of Kofina hill, chiselled on cone shaped rock there is a Mycenaen tomb, "the wolf layer", "Likotripa". Roman and Byzantine mosaics, notably the Baptisery - 3rd or 4th century - and ruins of a basilica church. Finally, in Amfissa there are many old mansions and neo-classic buildings adorned with plaster decorations and beautiful wall paintings of local painters at the time. Its inhabitants' main occupation is agriculture and namely the olive-trees.
The communities which along with the capital form the Municipality of Amfissa are: Elaionas (Topolia), a picturesque village with deep shade plane trees, with abundant spring water, a magnificent cascade and vividness, Prosilio (Segditsa), formed by three settlements, the old village, Biniani (the village in the plain) and the beautiful resort with "Panagia" Monastery, where lived as a monk for a while Kosmas Aitolos. At the site "lapsitsa" of Prosilio region there is a forest village under construction, the 21wooden houses of which are literally into the fir-trees forest, Drosochori (Kolovata) the inhabitants of which moved to Amfissa, but it is re-constructed as a magnificent resort, Agios Georgios , Agios Konstantinos and Sernikaki , three adjoining picturesque villages lying at the west of the olive-trees plain and, last, Agia Efthimia, the village of Astrapogiannos and Giannis Skarimbas, built on the ruins of Ancient Mionia.
This text is cited Sept 2003 from the WebPage of the Prefecture of Fokida 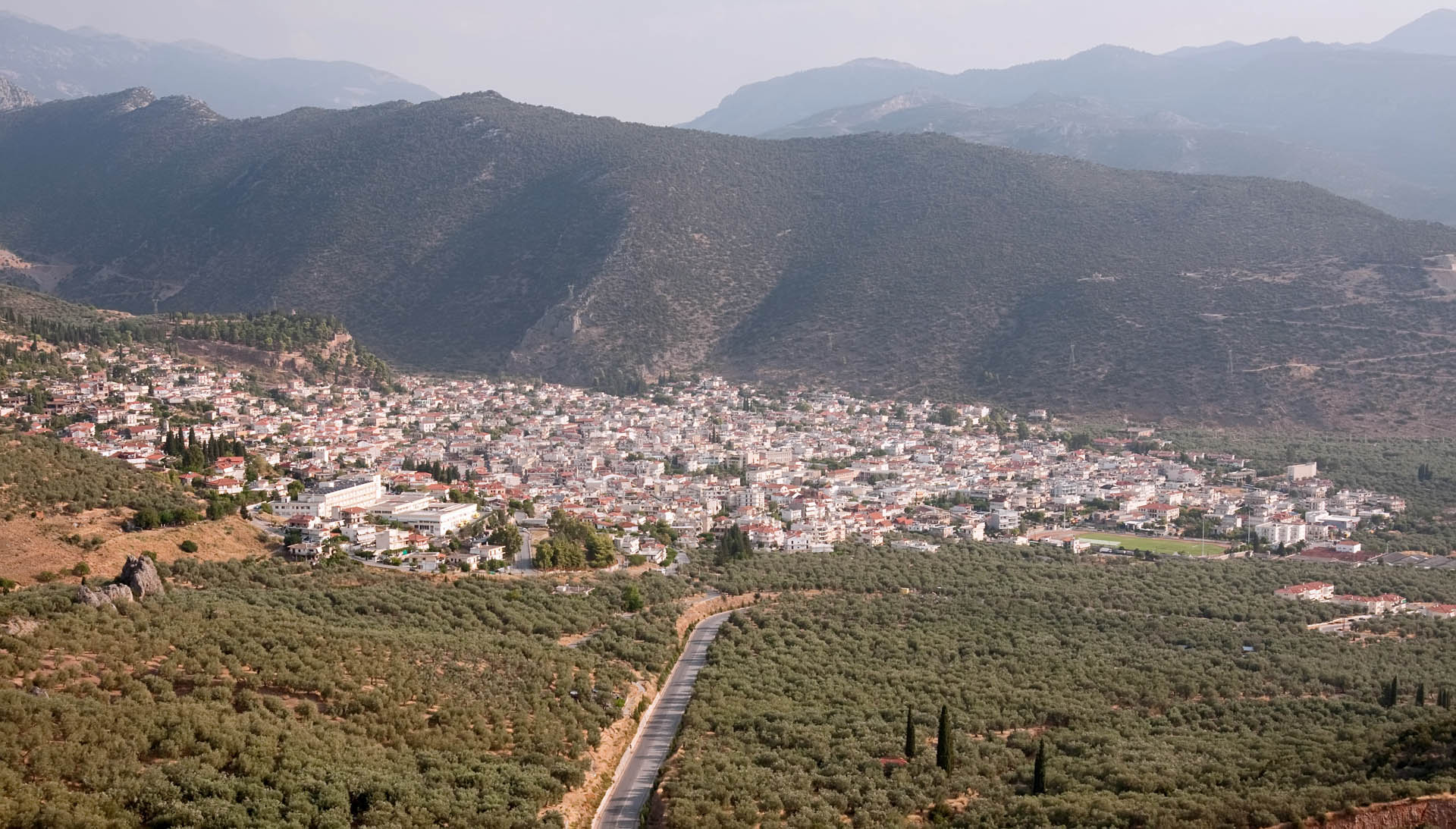