The navel of the Earth


Cradle of one of the most important sanctuaries of Greek antiquity and its most famous oracle was the land of Phocis and specifically the green valley of the river Pleistos. To the north the valley is surrounded by the mountains of Parnassus and Kirfi, while on the south it opens to the sea of the Corinthian Gulf, forming a deep bay, where today is situated the port of Itea. Positioned in the heart of central Greece, the area of Delphi comprises a crossroad of natural passages that lead from the eastern to the western Sterea Hellas and from Thessaly to Attica. But for the ancient Greeks this land meant much more. According to the legend, Zeus let two eagles fly from the ends of the world to find the navel, the centre of the Earth. And the sacred birds met at Delphi.

A sanctuary that mirrors history


On the site of the historical sanctuary preexisted a Mycenaean settlement (1400-1100 BC), which provided scant evidence of a female deity worship. We learn from myths that this was the primeval cult of Mother Earth, which gave way to Apollo by the end of the 9th century BC.

In the course of 1500 years, the history of the Delphi sanctuary and oracle is inextricably tied with the history not only of Greece but also of the then known world. The powerful monarchs of the East seek its oracles, while there isn’t a single event with some historical significance in the Greek region, in which the Delphic oracle has not implicitly or explicitly taken part or stand. Due to its wealth and influence, it was the apple of discord among the Greeks and a magnet for invaders.

Prevalence of Christianity deprives Apollo from its shelter and Pythia is silenced. The last Delphic oracle uttered to the emperor Ioulianos (AD 360-363) will be its swan song. The AD 394 decree of the emperor Theodosius A’ bans the pagan cults and their sanctuaries. One year earlier were held the last Olympic Games of antiquity.

Over the years the sanctuary is buried under rocks and soil accumulated by repeated landslides, inevitable consequence of the earthquakes and the abandonment of the place. In the medieval times the site is occupied by the village Kastri, predecessor of the contemporary town of Delphi. Nevertheless, the memory of the glorious past was kept alive in the literary sources, while modern travellers and amateur archaeologists never seized to visit the place, which was identified as the erstwhile sanctuary of Apollo. In 1892 begins the long series of systematic excavations conducted by the French School of Archaeology, which bring to light the legendary ruins.

In the sacred land of Delphi the poet Angelos Sikelianos (1884-1951) envisioned the revival of the Delphic Idea, the creation of a global spiritual Amphictiony inspired by the ideals of the ancient Greek civilisation. In 1927 and 1930 Sikelianos and his wife Eva Palmer carry out the Delphic Festivals, which will remain in history due to the first performances of ancient tragedy held in their natural space, namely the ancient theatre. In 1977 was founded the European Cultural Centre of Delphi under the auspices of the Hellenic Ministry of Culture and the Council of Europe. The aim of the institution is to promote culture and the arts at an international level. Ten years later Delphi will be listed among the UNESCO World Heritage Sites of Cultural Significance.


One is left stunned when for the first time faces the Delphic sanctuary lying on the base of the gigantic rocks of Parnassos, the Phaedriades. The rocks are split forming an awesome chasm. Its clefts emitted the vapours in which the ancients saw the spirit of God and gave way to the waters of the sacred spring of Castalia.

When current visitors, like the ancient pilgrims, approach Delphi by the Arachova - Delphi road, the first sanctuary to meet is the temenos of Athena Pronaia, the epithet meaning the goddess worshipped before the temple of Apollo. The myth says that the place was bestowed to Athena by Apollo as a token of gratitude for the help she offered him in his fight with the monstrous snake Python. In this sanctuary is situated the renowned tholos of Delphi, a jewel of the ancient Greek architecture. Tholos was a type of circular structure, found in other major sanctuaries as well, for example in Epidaurus and Olympia. These buildings are attributed to the cult of heroes or chthonic deities, an interpretation that remains uncertain in lack of ancient testimonies regarding their use. The tholos of Delphi dates to the beginnings of the 4th century BC and it is considered the work of the important architect Theodoros.

Leaving behind the grounds of Pronaia we ascend to the sanctuary of Apollo. The roughness of the amphitheatrical landscape betrays the most difficult challenge that ancient craftsmen dealt with. In order to even the natural ground, they constructed massive retaining walls that formed successive terraces for the bearing of the buildings. The whole temenos area was secluded by an enclosure, in the southeast corner of which was the main entrance, the same that is used today for entering and exiting the site.

From here began the Sacred Way, the ancient winding path that ran the sanctuary. By following it, the visitor today, while walking among the ruins, should visualize a sanctuary flooded by elegant buildings, free standing altars, statue complexes and numerous other votive offerings, densely scattered along the Sacred Way and around the temple of Apollo, the most imposing monument occupying an elevated position in the centre of the sanctuary. The Doric temple, preserved today, was built in 330 BC, during the reign of Alexander the Great. It was within the innermost part of this temple, the adytum, that Pythia, seated on the tripod, uttered the prophetic - and by all accounts unintelligible - words of God, while outside the adytum burnt the inextinguishable sacred fire, fed exclusively with fir and laurel wood.

The 6th century BC treasury of the Siphnians is the oldest structure in mainland Greece entirely built by the renowned marble of Paros, while Korai statues support the prostasis - as in the Erechtheion of the Athenian Acropolis one century later. The monument is entirely worthy of the reputation of the island that donated it. Siphnos is among the richest Aegean islands during this period and it is no coincidence that the decoration of the building is attributed to two sculptors from Paros and Chios respectively; the tone in the art at that time give the island workshops. The Athenians also have a dynamic presence in the sanctuary; in their own treasury, as well as in the large stoa, erected below the temple, Athenians kept the booty, seized at the victorious battles against the Persians. The Athenian treasury also provided an extremely rare finding: two hymns to Apollo, including the ancient musical signs known also from papyri extracts. They were inscribed on the outside walls and date to the 3rd century BC.

In the NW corner of the sanctuary, perched on a hillside with panoramic view of the area, lies the theatre of Delphi, built in 400 BC of white stone from Parnassus. Its capacity is estimated to 5000 spectators and it bears all the typical architectural features of the Late Classical Greek theatres. Even higher, a path leads from the theatre to the stadium, which in the 5th century BC was able to hold 7000 spectators. In the theatre and stadium were held the music-dramatic and sporting events respectively of the Pythian Games in honour of Apollo. As a training facility was used the gymnasium, which in the case of Delphi is the most complete example of an ancient gymnasium preserved today. In the 2nd century AD were constructed the thermai, namely the public hot water baths, which become particular fashionable in Greece after the Roman conquest. Earlier, in the Hellenistic period the gymnasium evolved into a kind of cultural centre, where acclaimed personages of arts and letters congregate and give lectures. 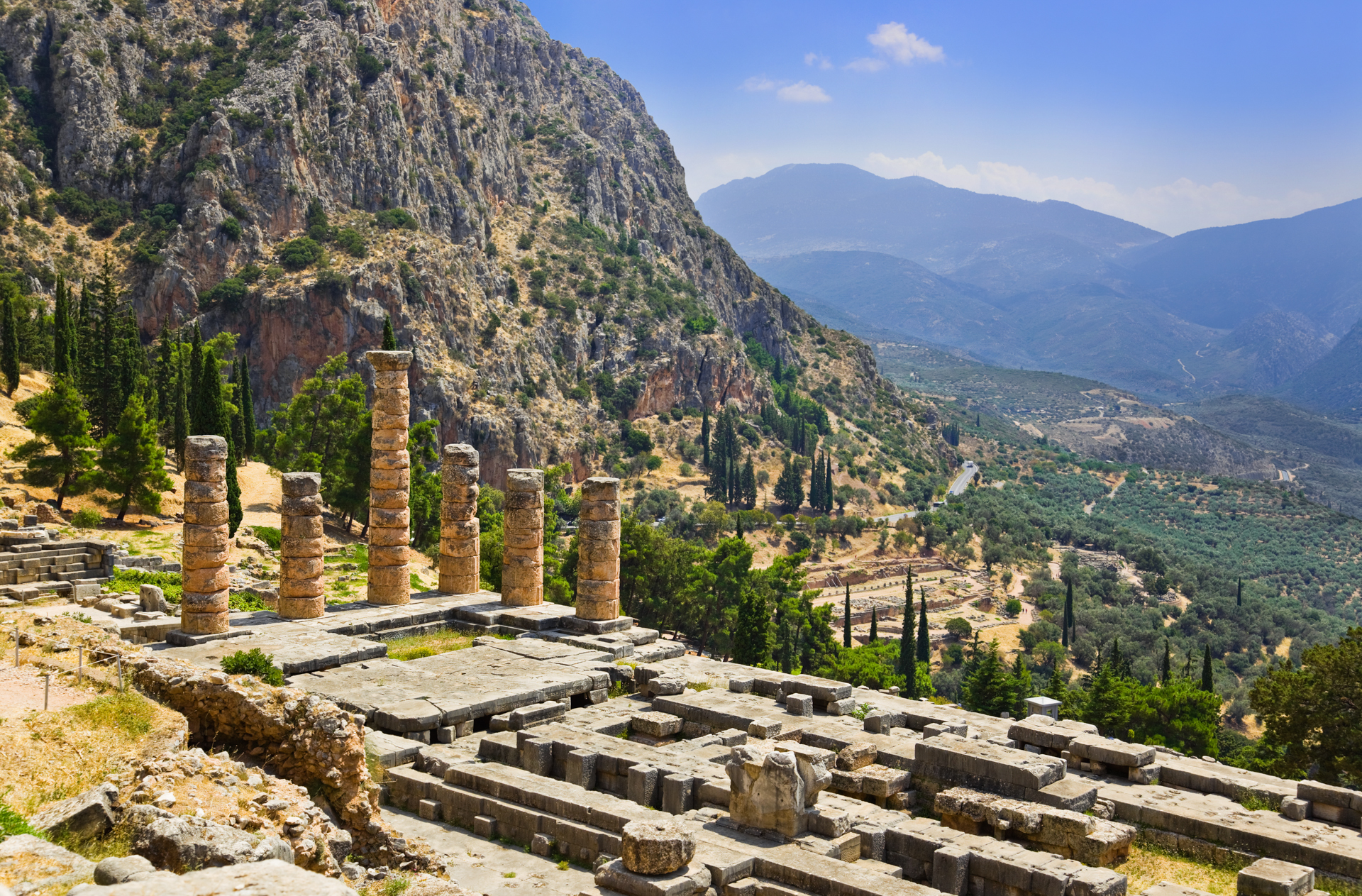 Displaying 10 out of 23 total photos found for DELFI. 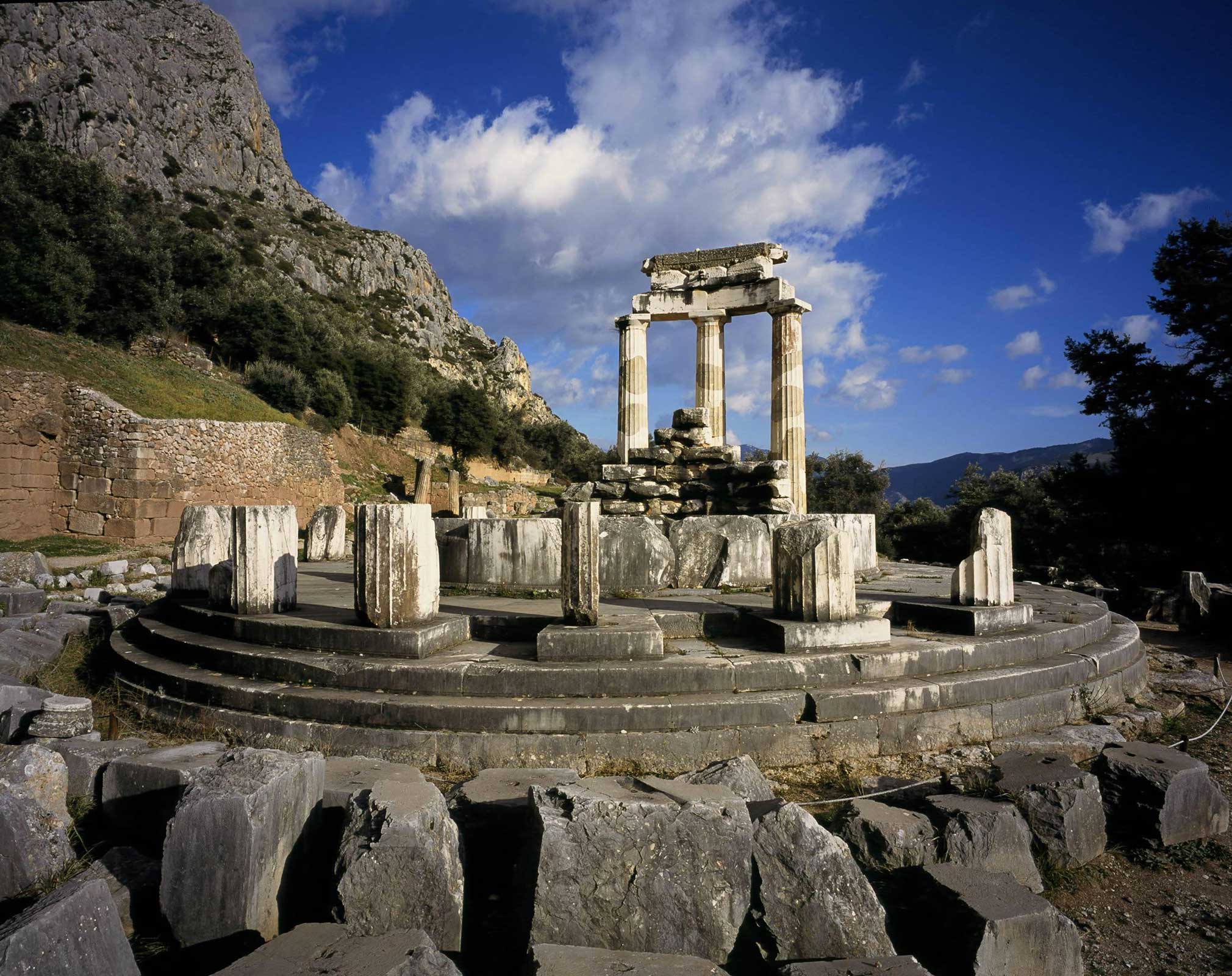 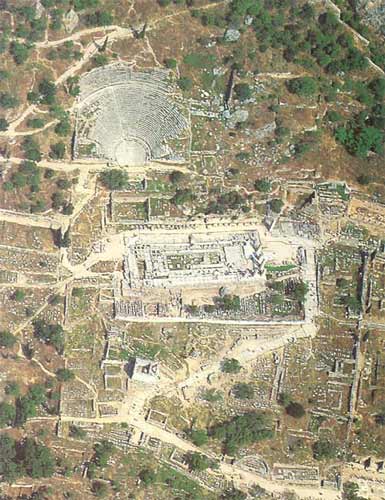 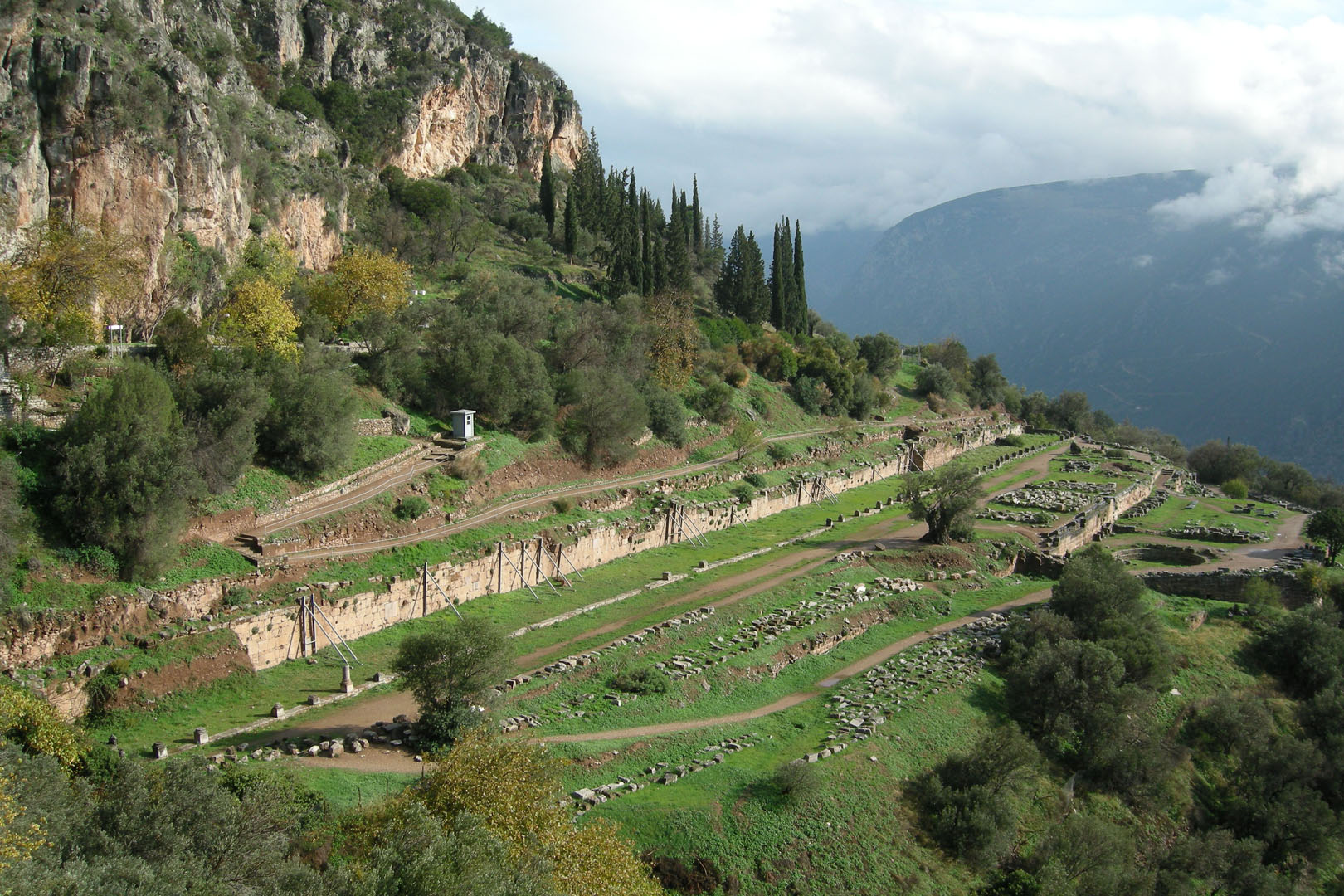 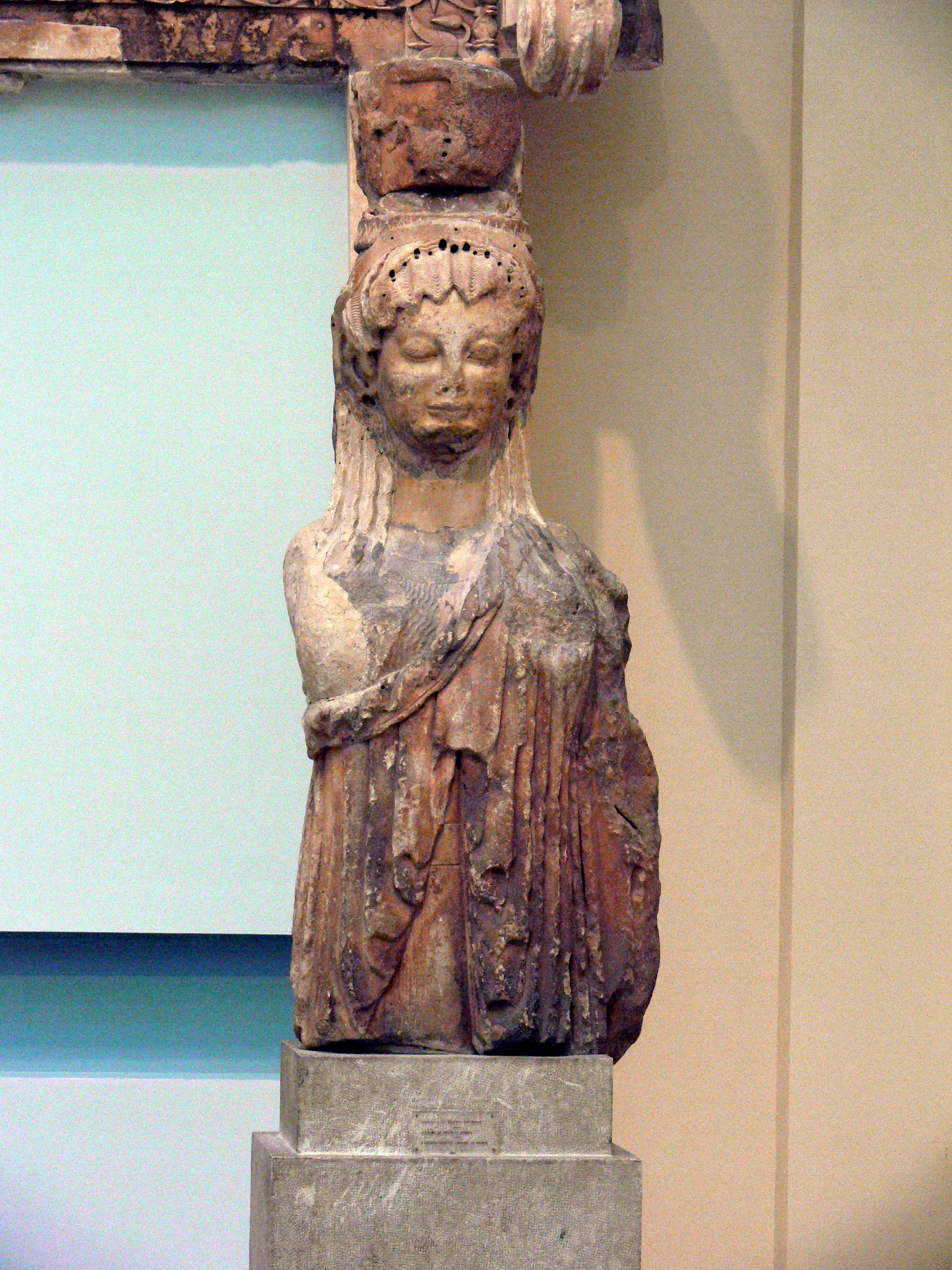 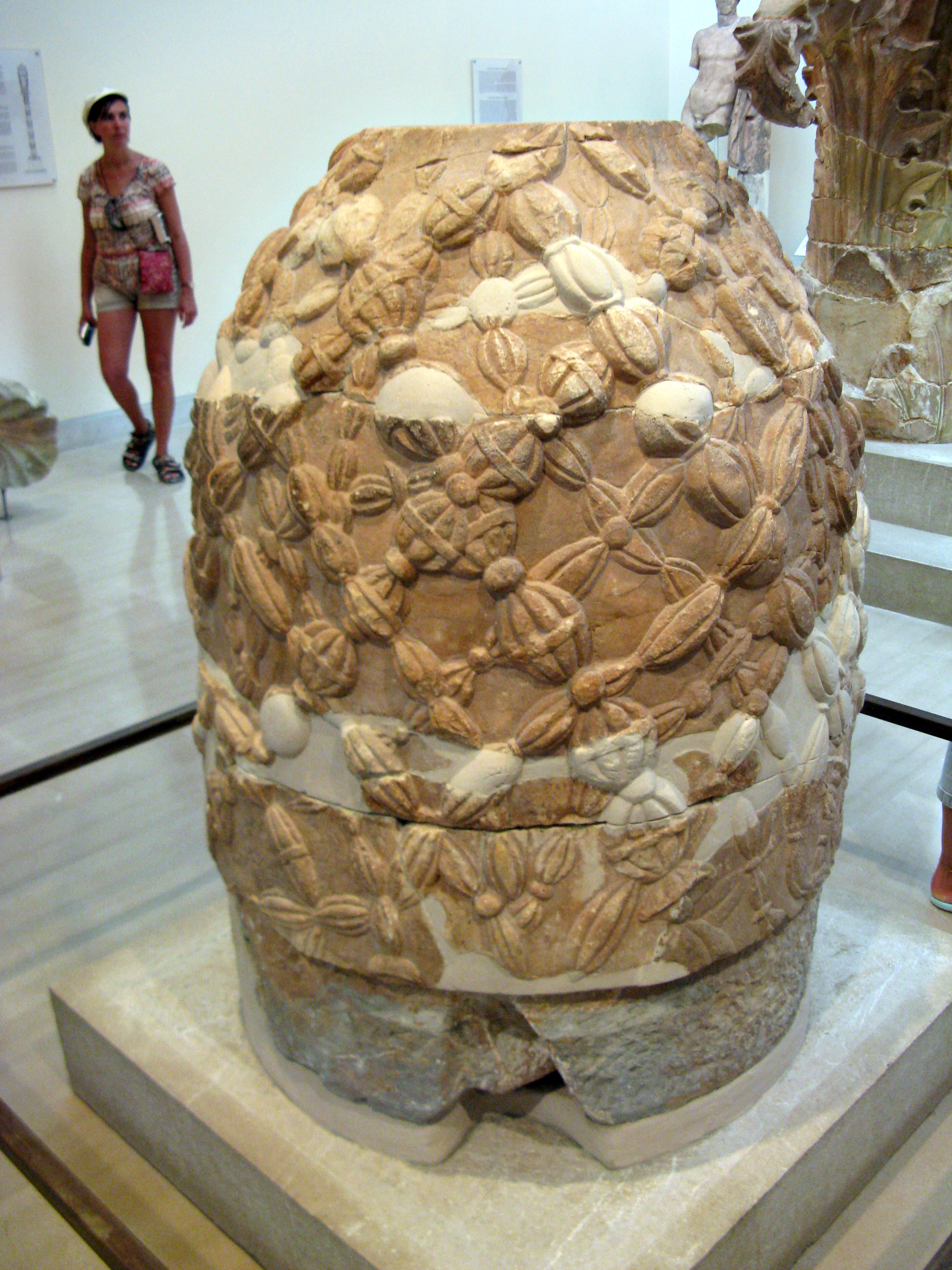 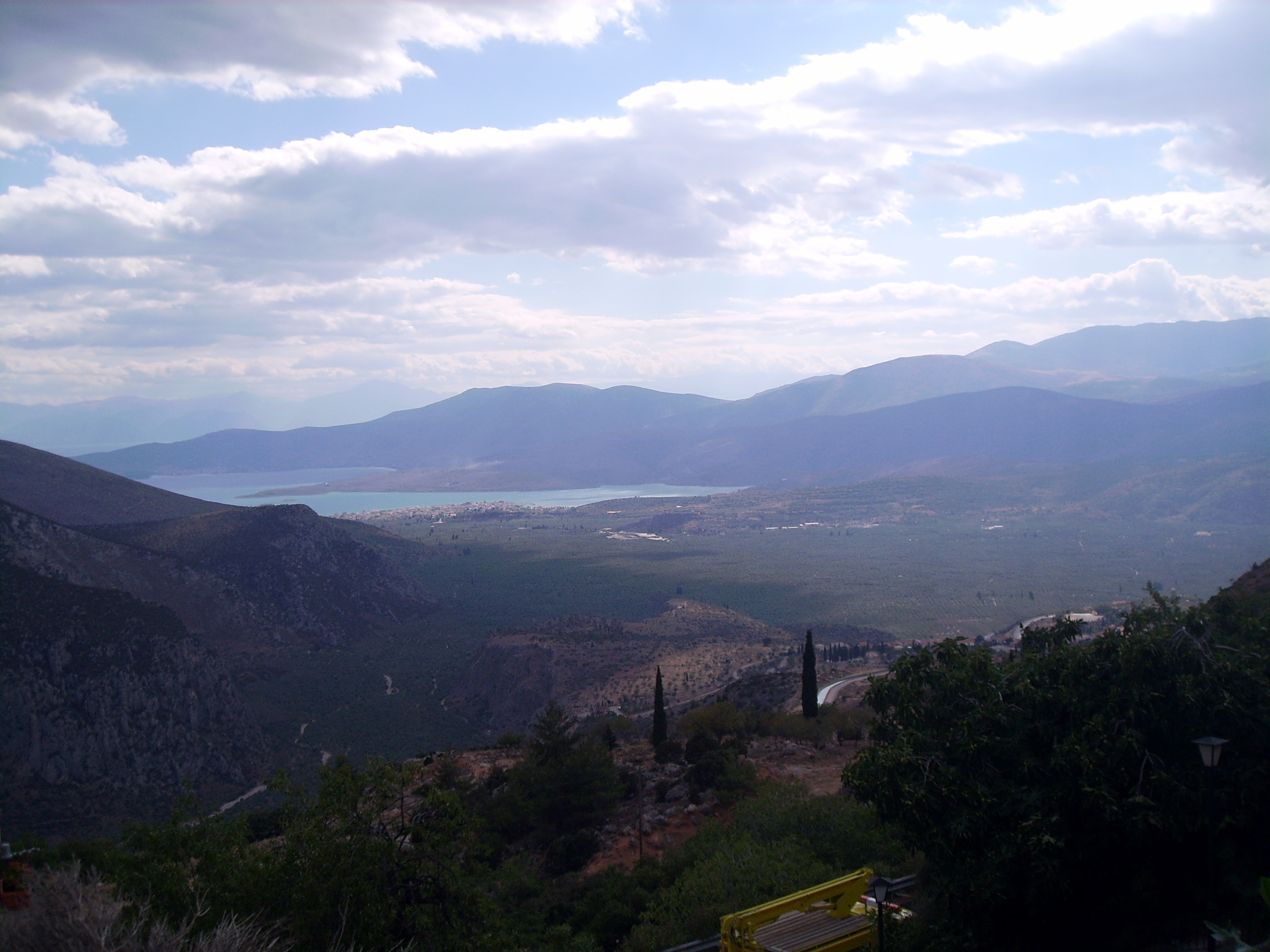 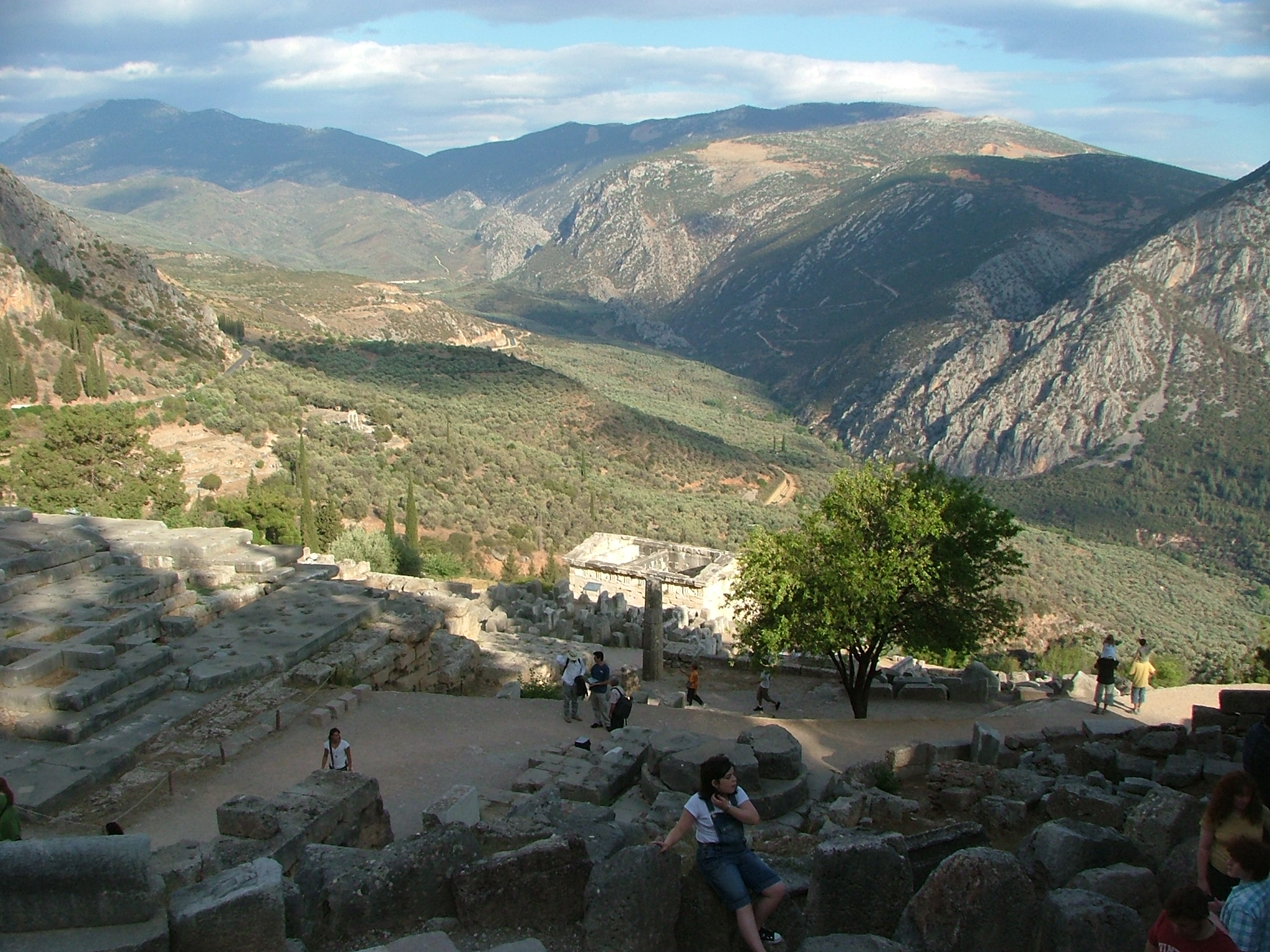 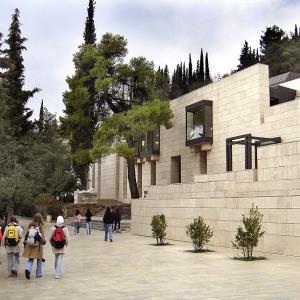 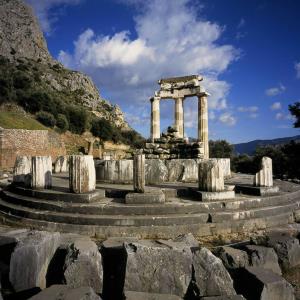 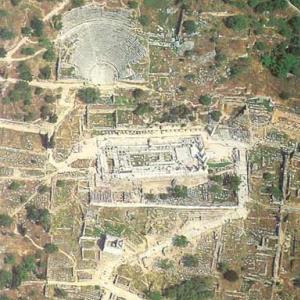 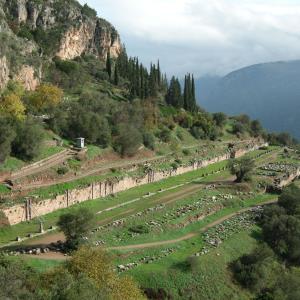 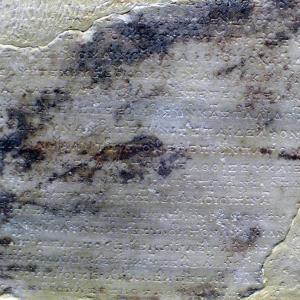 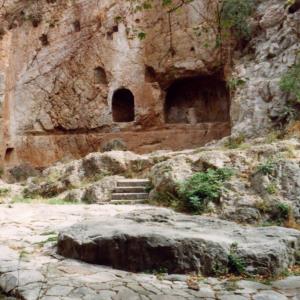 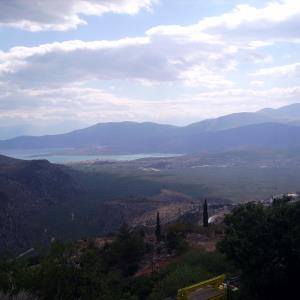 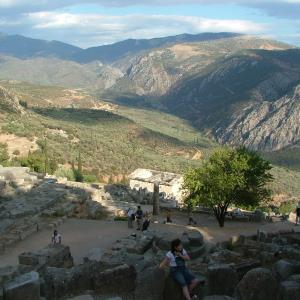 View all photos for DELFI

UNESCO - World Heritage List1 Mythology12 Ancient literary sources4 Information about the place5 History2 Ancients' feasts, games and rituals4 Various locations1
If you want to find additional information on the greater and/or surrounding areas select one of the titles below and click "more"