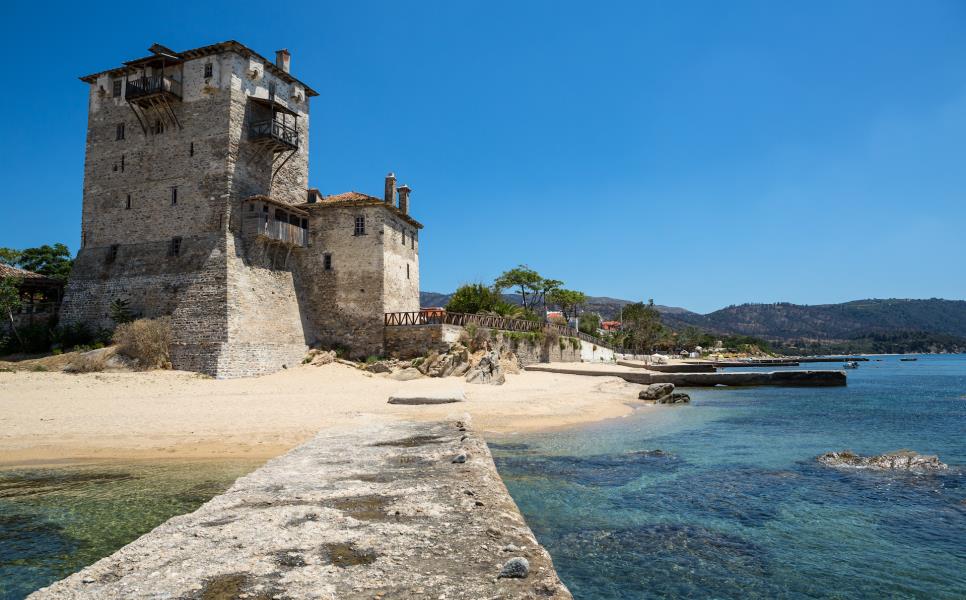 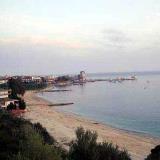 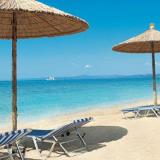 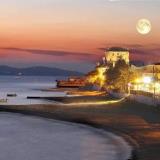 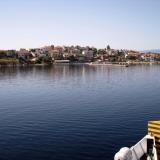 Ouranoupolis is the threshold of Mount Athos. It is the last village just a kilometre before the border of the Holy Mountain and where a visitor who intends to visit the monastic state must go to. Every day, from the small harbour under the shade of the Tower, you will see the boats which take the pilgrims (after they have previously aquired the visa pass they will need to enter) to the Monastic Republic.
Ouranoupolis took its name from the Alexandrian city that was founded in 315 B.C. by Alexarhos, the son of Antipatros and brother of Kassandros. This city was built on top of the ruins of Sanis an Andrian colony, which Phillipos the 2nd had previously destroyed from its foundations. Ancient coins found bring the sign "Ouranio Poleos" meaning city in the sky and it also had the representation of Ouranio Afrodite seated on a ball on one side and on the other the sun shining with eight beams.
The first monasteries were founded in the 10th century on the peninsula of Athos. One of these was also the "Abbey of Zigou" or "Fraggokastro" which was discovered near Ouranoupolis. In this monastery, Osios Athanassios the Athonite and founder of Megistis Lavras practised for some time. This Abbey is still at the stage of excavation from which important discoveries have been revealed and it possesses the important privilege of being uniquely positioned outside of the border of Mount Athos, so consequently it can be visited by women.
In the beginning of 14th century the Abbey of Vatopedi built the Byzantine Tower that dominates untill today the S.W end of the village for the protection of the metohi (property). This tower is the biggest and the best maintained (particularly after its recent restoration by the 10th Inland Revenue of Byzantine antiquities) in Halkidiki. An earthquake in the 19th century which completely destroyed the top floor made repairing necessary and so it then took on its final form. During the same time its accompanying buildings were built. One of them accomodates nowadays the local municipal office.
After the Asia Minor destruction, refugees from the Marmara islands in Propontida reached this area and found shelter in the Tower, its accompanying buildings and in tents. In 1926 a German company built the first houses of the village, some of which still stand today. Later the residents built the Church, the School and so began the organised community with the name Prosforion. Later the village took on the name Pirgos meaning "Tower" and in around 1960, it took on its final name "Ouranoupolis". In 1928 the Lock couple from Australia came to the village and connected themselves to the life of the village. They lived in the tower and in collaboration with the residents who knew the art of carpet making used drawings copied from monastic codes and put the foundations of a local manufacture which gave work and income to a lot of families.
The first tourists arrived in the 60th decade . At that time roads were built, streets in the village were finally completed and last but most important electricity came. Also the first hotel was built and named Xenia.
Today Ouranoupolis is considered to be one of the most important resorts in northern Halkidiki. There are many restaurants and Hotels that offer the visitor good food and a comfortable stay. During the summer months there are daily cruises to Mount Athos from the harbour of the village. A must for those who choose this unique and beautiful village and a chance for one to see all the monasteries on the western side of Athos. One may also enjoy the sea and the beautiful and clean coasts or go opposite to the islands called Drenia.
For those who love nature, there are lots of walkingpaths through the olive and pine hills. One may also visit the "Serbian" region on the Northern side of the peninsula and ofcourse the "Zigou Abbey" just a kilometre away from the village.
In the village one can visit the exhibition in the Byzantine tower with Byzantine antiquities and icons. In the souvenir shops you may find famous hand made carpets with Byzantine drawings, goat hair rugs,Byzantine icons or jewels made with natural raw materials. You may also find local products such as oil, wine, honey, raki (tsipouro), oregano and various teas. In the evenings you may dine in one of the picturesque taverns,taste the fresh fish and enjoy carefree moments. One might also be lucky and be in the area when cultural events and religious holidays take place.