Archaeological site, Cultural heritage
Address: 10400 AKADIMIA PLATONOS , ATHENS , GREECE
URL: http://odysseus.culture.gr/h/3/gh351.jsp...
Academy was a suburb of Athens, named after the hero Academos or Ecademos. The site was continuously inhabited from the prehistoric period until the 6th century A.D. During the 6th century B.C., one of the three famous Gymnasiums of Athens was founded here. Moreover, it is recorded that Hippias, the son of Peisistratos, built a circuit wall, and Cimon planted the area with trees which were destroyed by Sulla in 86 B.C. In 387 B.C. Plato founded his philosophical school, which became very famous due to the Neoplatonists, and remained in use until A.D. 526, when it was finally closed down by emperor Justinian.
The first exvavations on the site were carried out between 1929 and 1940 by P. Aristophron, at his own expense. Work was resumed in 1955 by Ph. Stavropoulos under the auspices of the Athens Archaeological Society, and lasted until 1963. Since then, excavations have been conducted by the 3rd Ephorate of Antiquities.
The most important monuments of the site are:
Sacred House. Building of the Geometric period which comprises seven rectangular rooms on either side of a corridor. The structure presents strong similarity to the sacred house of Eleusis. Sacrificial remains found inside the building bare evidence of intensive religious practice.
Gymnasium. Large rectangular building with an internal peristyle, and rooms on the north side. A smaller room on the interior was used as a palaestra. Dated to the 1st century A.D.
Peristyle building. Large square building with an internal peristyle, identified either as the Palaestra or as an annex of the Gymnasium. Dated to the 4th century B.C.
Early Helladic absidal house. It has a vestibule, a central hall and a small auxiliary room, and has been interpretated as the prehistoric residence of the hero Academos. 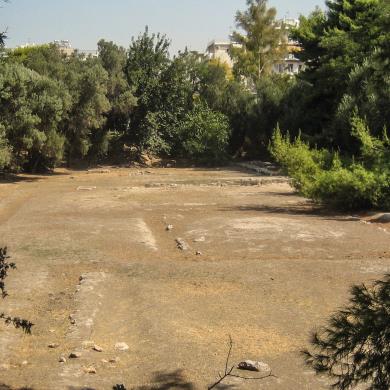 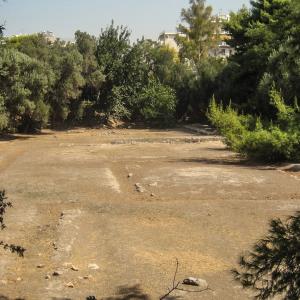