Archaeological site, Cultural heritage
Address: 32200 GLAS , THIVES , GREECE
URL: http://odysseus.culture.gr/h/3/gh351.jsp...
Glas is a low rocky eminence rising from the surrounding plain. The latter appeared after the drainage of lake Kopais. It looked like an islet when the lake was full with water. On the hill, evidence was found for setlement in the neolithic era, the hellenistic and byzantine times. During the Greek Revolution of 1821 against turkish occupation the hill was a refuge point for the people of the area, who built a small chapel. The existing monuments date to the mycenaean period when Glas was fortified and turned to be the control centre of the mycenaean drainage system for lake Kopais and the fortress of the people who cultivated the fertile plain. Mycenaean Glas was destroye by fire and abandoned a little before 1200 B.C. The drainage system was abandonned too and the lake was flooded again.
In 1893 F.Noack drew plans of the rock and the visible remains of Glas. Later in the same year A. de Ridder excavated the so-called "Palace". Systematic excavations were conducted from 1955 till 1961 by I. Threpsiadis ith additional campaigns in 1984 and the early ΄90s by prof. S. Iakovides under the auspices of the Archaeological Society.
The most important monuments of the Mycenaean Acropolis of Glas are:
•The imposing cyclopean walls were built to serve as the fortification of the hillock in mycenaean times. They are preserved in their total length of 3 kilometers and width of 5,40 - 5,80 ms. Their existing height is 2 to 6 ms. Indentations breakup the line of the walls; these are due to the need to faciliate construction work by building it partially. It has 4 gates, from which the South Gate is apparently the central one.
•Rectangular inner enclosure. At its nothern part extends the "palace" whereas at its southern long buildings which served as workshops and storerooms for agricultural products.
•The "palace" - the most important building on the hill - is partly incorpotated in the fortification. It is consisted of two narrow wings (north and east) joining at a ringht angle, which open to an inner courtyard. Each wing is a residential buiding similar to the other and comprises a megaron at its free end and a row of small rooms connected by a double corridor. The "palace" was adorned with frescoes. It is not considered the residence of a king ("anax") but of two lower in rank officials aparently equal to each other. 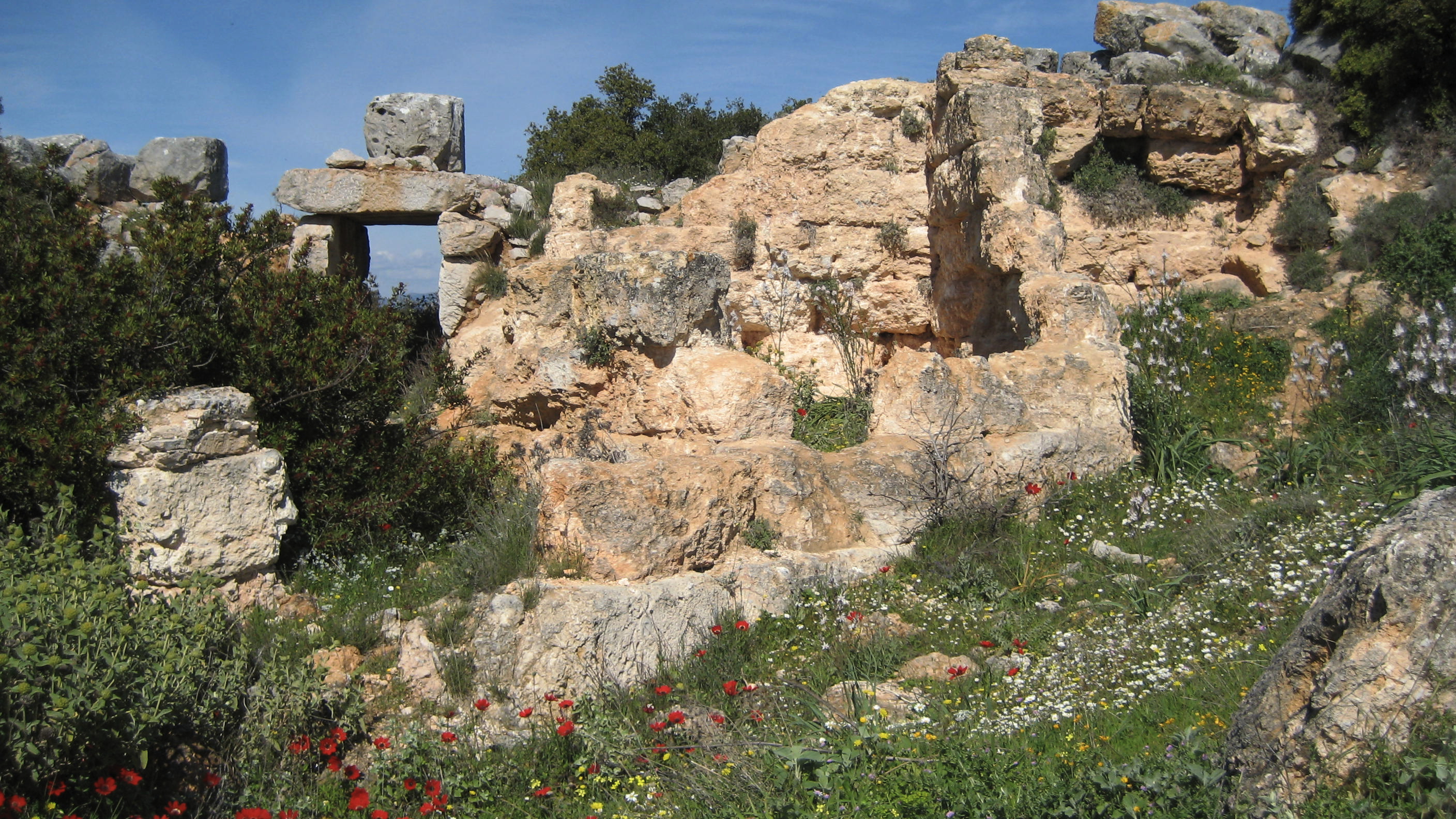 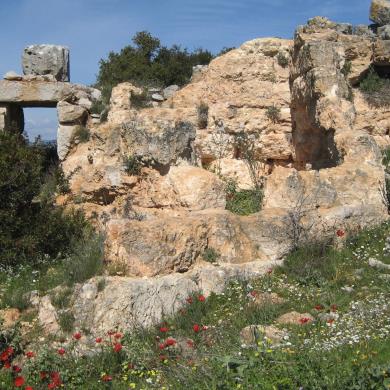 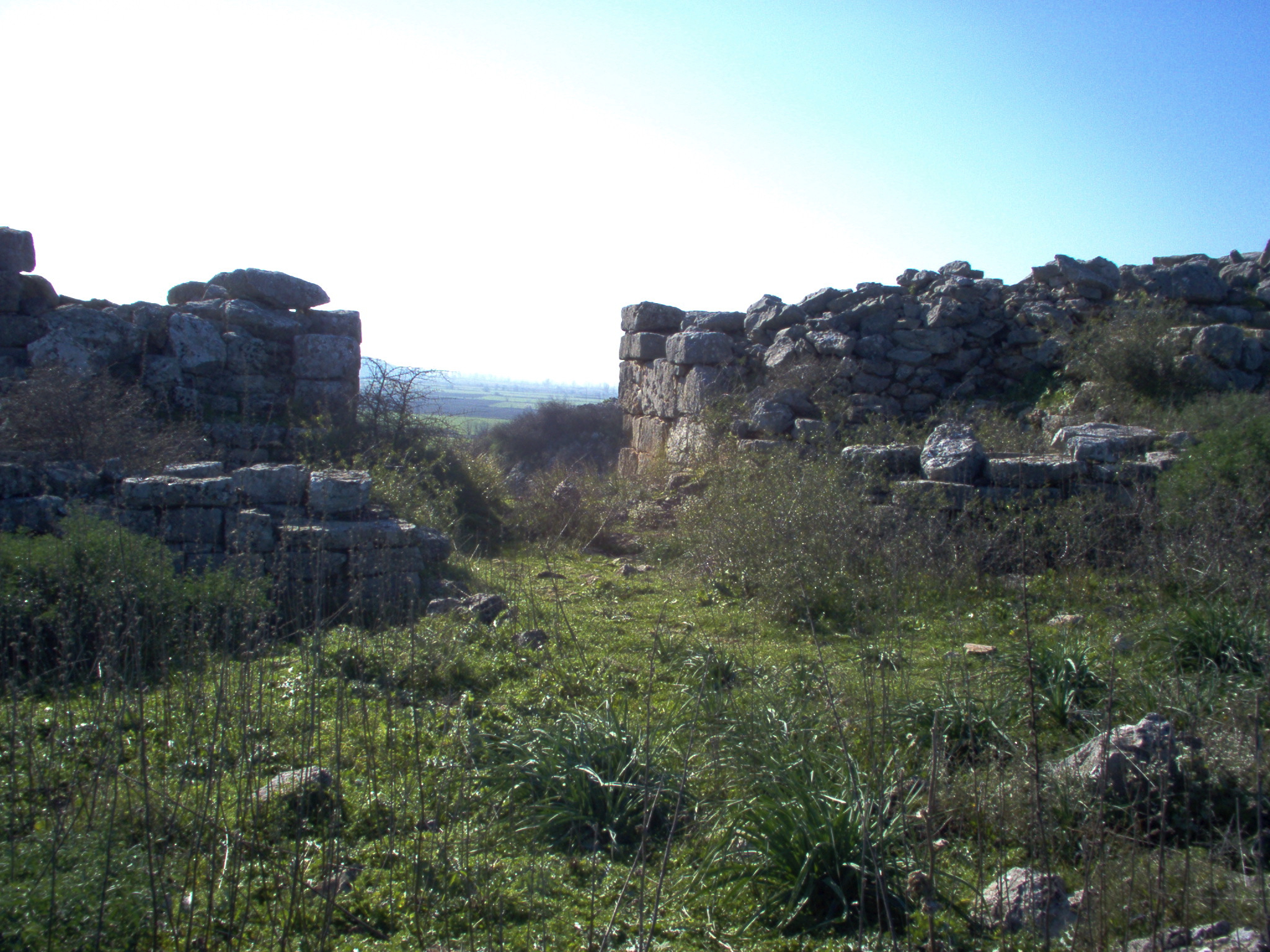 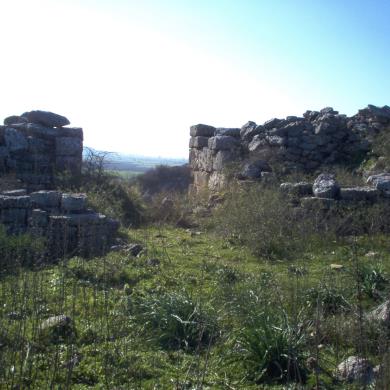