Maroneia was founded by Chian colonists on the SW slopes of Ismaros, in the mid-7th century B.C. and soon developed into a prosperous and densely inhabited city-state. According to tradition, the mythical founder (oikistes) of the city was Maron, a priest of Apollo. Homer describes Maron's hospitality and the gifts that he offered to Ulysses when he visited the land of the Kikones. During the Classical period the city had a strong fortification wall, 10 km. long, enclosing an area of 4 sq.km., which extended from the coast up to the top of Ismaros.
The most important monuments of the site are:
• The Ancient Theatre
It was constructed in the Hellenistic period and remodelled in Roman times. Preserved are: three rows of stone seats of the cavea, the central and the horseshoe-shaped conduit of the orchestra, and the building of the Roman skene.
• Sanctuary of Dionysos.
The sanctuary, probably dedicated to Dionysos, is built on a terrace supported by a retaining wall. Parts of two more buildings have been revealed to the north and south of the sanctuary, which is dated to the 4th century B.C.
• "House of the mosaic".
Large, private house, preserving a mosaic floor in the men's quarters (andron). Dated to the end of the 4th or the beginning of the 3rd century B.C.
• Roman propylon.
Monumental gate, constructed probably during the reign of emperor Hadrian (124-125 A.D.).

Byzantine Maroneia
In Early Christian and Byzantine times, the area of Maroneia was restricted around the seashore, and the city thus became a prosperous harbour in the North Aegean. Investigations in Byzantine Maroneia started in the 1960's and revealed rich ecclesiastical and secular buildings.
In the frame of restoration that took place, the triconch sanctuary of the basilica at the site of Synaxis was reconstructed and the mosaic of the NW chapel was removed and replaced; also removed was the mosaic floor of the atrium of the basilica at Paleochora.

The most important monuments of the site are:
The barrel-vaulted churches of the Early Christian period at the site called Parathyra, in Maroneia.
The Early Christian basilica of the 6th century A.D., with mosaic floor, part of the Byzantine settlement, and cemetery of the "dark age". All the monuments are located at the site of Paleochora, 100 m. away from Agios Charalambos.
Byzantine monastery over the ruins of a Justinianian three-aisled basilica with transept. The eastern, triconch part of the church is built with curved marble blocks taken from a Roman heroon. It was located at the site of Synaxis and is being excavated since 1985.
Part of a bath installation dated to the period of Justinian A' conch of a church decorated with a wall-painting of a foliate cross, dated to the second phase of the Iconomachy, under a church of the 11/12th century; the fortification walls (bulwark, rampart) of the castle of Maroneia, with rectangular, circular towers and wine-presses. It was excavated at the coastal settlement of Agios Charalambos, 6 km. far from the community of Maroneia, where the harbour of the ancient and Byzantine city was located.

The text is cited from the Hellenic Ministry of Culture website 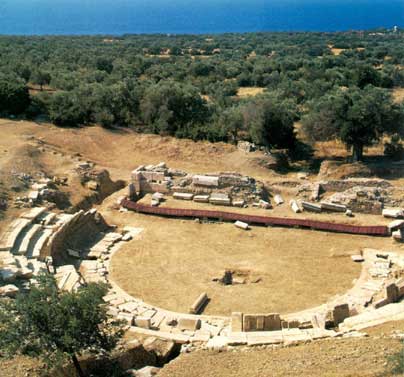 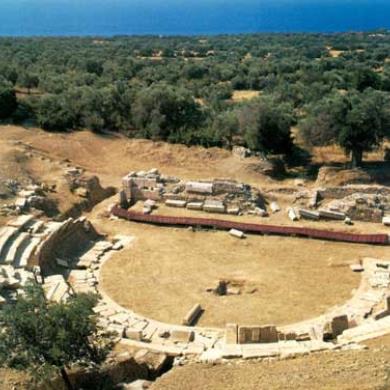 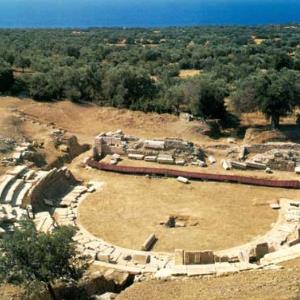