Bourtzi, at south of the Methoni castle

The castle of Methoni lies at the southernmost point of the west coast of the Peloponnese, in a place which had been fortified since the 7th century BC. Until 1204 AD it was used as a fort by the Byzantines, while in 1209 AD the Venetians, acccording to the treaty of Sapientza, became the rulers of the area. During the first era of Venetian occupation (1209-1500), Methoni was established as a financial centre and commercial port and the town reached its peak. It was then that the magnificent castle was erected with its massive fortification walls, one of the most distinctive defensive structures of the medieval Venetian architecture.
In 1500 the Sultan Bayezid II (1447-1512) seized the castle of Methoni, initiating a period of turbulent history and prolonged decline in the region. By 1685 the Venetian force under Francesco Morosini (1618-1694) reconquered Peloponnese, but the Ottomans came back in 1715; this time their dominance was complete and would remain unchallenged until the early 19th century Greek War of Independence. Methoni became the seat of the Pasha of Western Messenia until 1828, when it was liberated by the Moreas expedition force led by the General Nicolas Maison.
Today, the castle is in excellent state of preservation, while considerable remains of the medieval town still survive within its area: the Byzantine church of St. Sofia, the 1833 church of the Transformation, erected by the French liberating force (1828-1833), the Turkish baths, along with ruins of urban buildings.
Between 1500 and 1573, on the rocky islet to the south of the castle, the Ottomans built Bourtzi (meaning tower); this was an octagonal fort aimed to reinforce the defensive system of the area, but it also served as a prison and torture chamber.

The traveller Pietro Casola who visited Methoni in 1494 writes: "a large moat is being opened now, which, when finished, will be an amazing piece of work". It seems that the Venetians intended to connect the two areas, the east and the west in order to isolate the castle from the mainland, but did not have time to complete their work since they were driven away by the Turks six years later (1500). The Venetian bridge was wooden and mobile and stayed like that until 1829. The new bridge, which is in a very good state, was built by the French general Maison. It stands 4 meters high, 45 long, 3 meters wide and it has 14 arches. Through this bridge the modern visitor will pass in order to enter the spectacular castle from the town of Methoni, which was build on a plan by Kapodistrias. This plan was issued on the 4rth of May 1829 by Captain Adubart of the mechanical division in Maison's French army. It was approved with the index number 1 (it is obviously the first plan of a Greek town) and bears the signature of Ioannis Kapodistrias.
Text quoted from the work «Three Old Bridges of Methoni» by the local historian Takis Demodos

A historical enigma still lies in the castle: the origin of the red granite pillar, close to the palace of the Governor of Methoni, which has been linked to Morozini. On its epistyle, written among others is: "Rectori Fr ....cissi Moros (ini) vespiciat alta maris... MCCCCLXXXIII vicer Ieo super...". This indicates that the pillar was first placed in 1483, meaning during the first period of Venetian Occupation and was restored 203 years later by Morozini, but without knowing the origin of the pillar and its original donor. And this, because there has not been found an ancient structure in Methoni or the surrounding area built by similar granite. A thought that may be the answer to the question is connected with the underwater findings at the cape of Karsi of Sapientza and the dozens of granite columns that lie in the bottom of the strait of Methoni. The similarity of the monument with another pillar at the small plaza of St. Mark in Venice (Piazzeta San Marco), next to the Marcian library, is impressive. In the dominance of the first Venetian occupation and in 1483, according to Buchon, two pillars from the shipwreck of Spitha were pulled up from the sea, transported and after having been decorated with typical venetian capital gotico fiorito, were placed in the small plaza of St. Mark in Venice and the plaza of the arms of the Castellani in Methoni. During the 1686 triumphal regaining of Methoni, the pillar was restored to its originigal place by Morozini and was crowned either with his own bust or with the lion of the St. Mark, the symbol of the Venetian state.
Extract from the book «Chora-Pylos-Methoni. A journey to the south» by Yannis Biris, Athens 2000 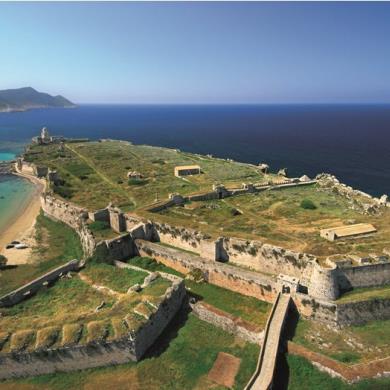 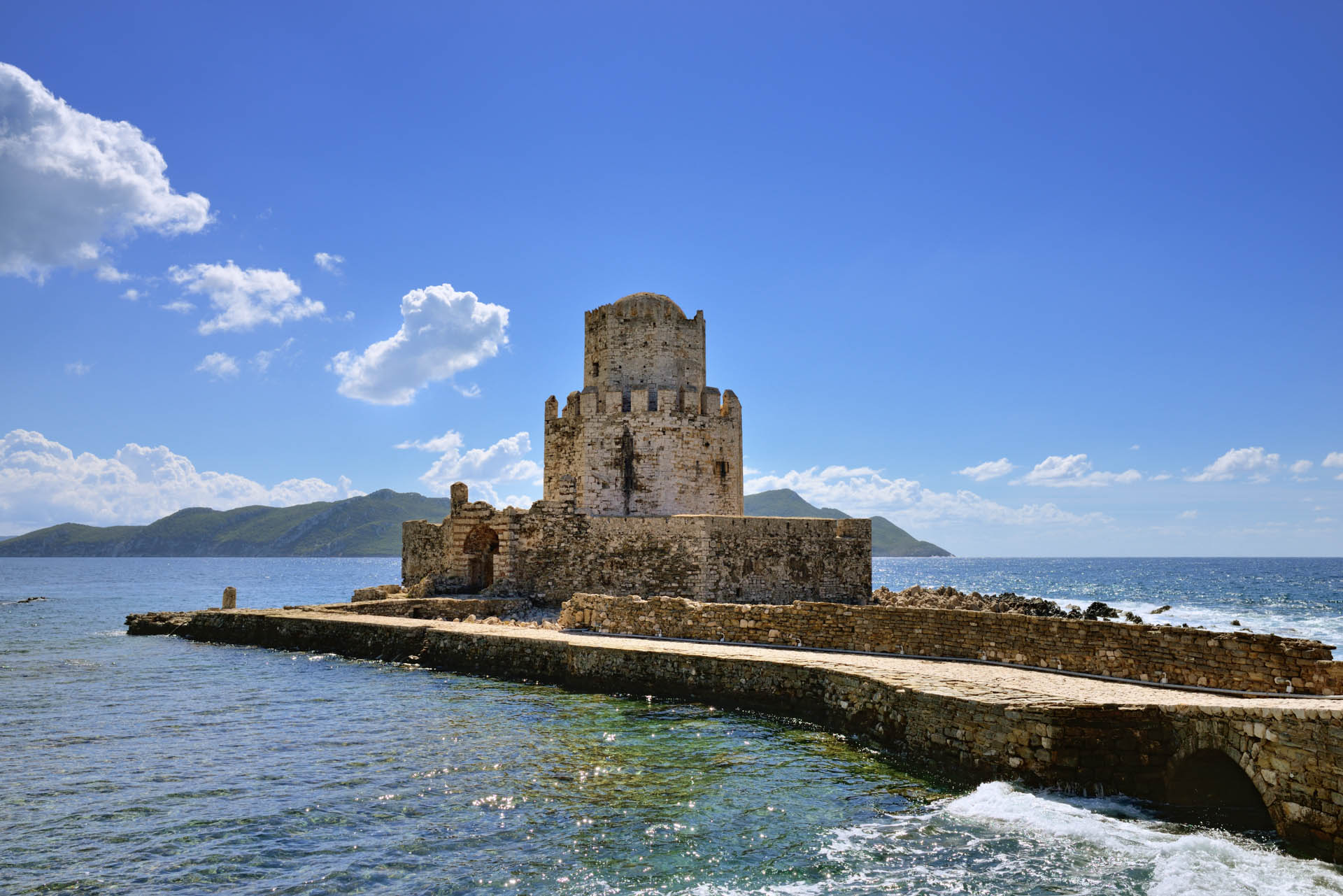 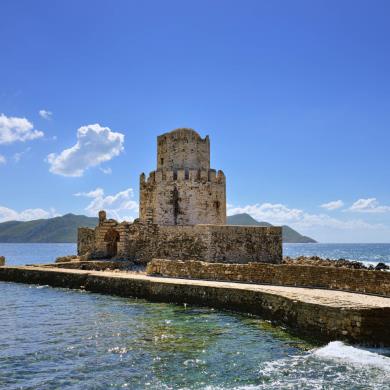 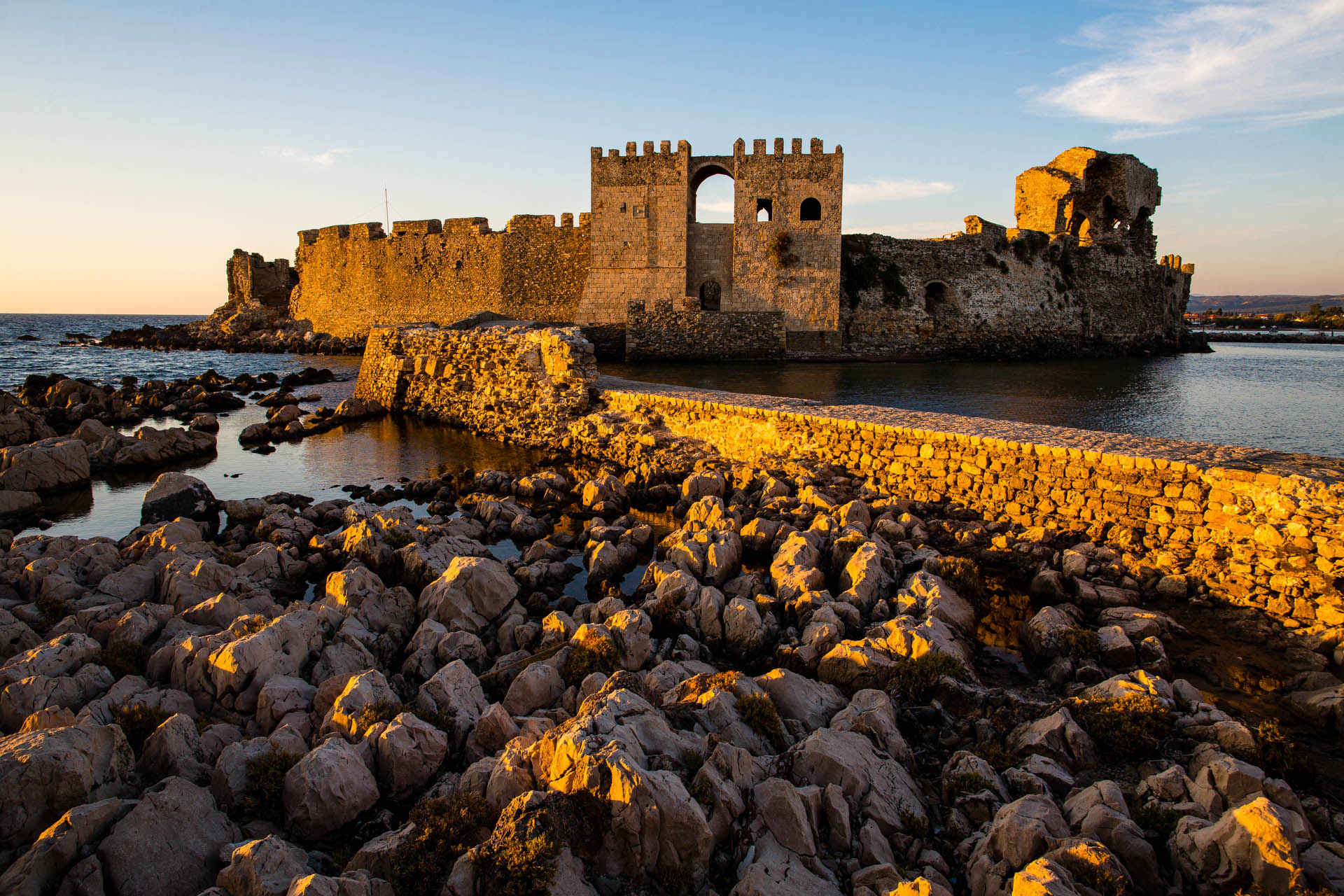 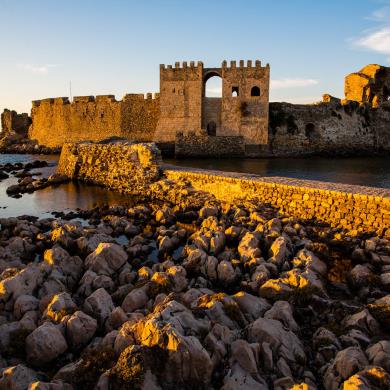 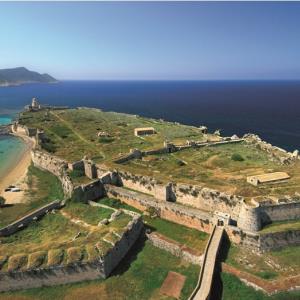 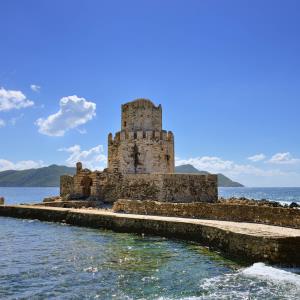