View of the monastery

Monastery, Byzantine & Post-Byzantine Monuments
Address: 23100 MONI AGION TESSARAKONTA , THERAPNES , GREECE
Tel.: +30 27310 26780
It is one of the most important monasteries in Laconia. The catholicon (main church), a triconch domed church of the Athonite type, was erected in 1620. The walls of the naos and narthex are covered with frescos painted by Georgios Moschos. The church of Zoodochos Pighi (the Holy Virgin, Source of Life) was built to the north of the catholicon in 1707.
During the Byzantine period the centre of the worship of the Fourty Martyrs was the cave-like church, originally used as the catholicon of the old monastery. The new monastery was founded by abbot Cyprian and the monks Parthenios and Theodosios. During the Turkish occupation the monastery came under the direct jurisdiction of the Ecumenical Patriarchate and gained privileges and many metochia (estates). Significant was its contribution to the education of the enslaved Greeks.
The north wing of the building with the cells has already been restored and work will soon be completed in the east and south wings. Systematic work for the consolidation, restoration, and cleaning of the wall paintings was begun in 1985. Today the monastery is used as a convent for monks.
Many other important Byzantine and post-Byzantine monuments have been located in the vicinity of Chrysapha, including the church of Panaghia (Our Lady) Chrysaphitissa, the church of the Dormition of the Virgin, the church of St. Demetrios, and the church of St. Nicholas. 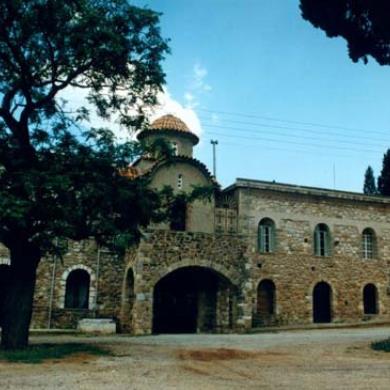 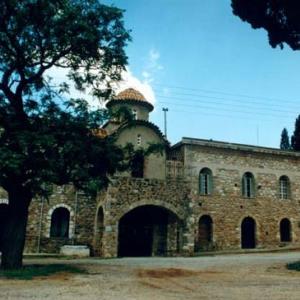