The Monastery lies at a short distance to the east of Athens, on a hillside at the foot of Mt. Hymettos. It is enclosed by a high wall with two gates, one on the east and one on the west side. The catholicon was built in the late 11th century and was dedicated to the Presentation of the Virgin to the Temple. It is a cross-in-square, four-column church, with a dome, and its walls are built in the cloisonne masonry with poor brick ornaments. The barrel-vaulted chapel to the north, dedicated to Aghios Antonios, was added in the 16th century, the domed narthex was added in the 17th century, and the bell-tower was constructed much later, in the 19th century.
The interior of the church is decorated with wall paintings dated before 1700 while those in the narthex are a little earlier, dated to 1682 and made by Ioannes Hypatios, according to an inscription.
To the west of the church is a complex containing the kitchen and the refectory. Along the south side of the enclosure a row of buildings is attached. Among the preserved structures are an 11th-century bath installation, with a domed central chamber. During the Turkish occupation it was used as an olive-press. Two blocks of cells are preserved on the west and south sides. To the west of the monastery, outside the enclosure, are the ruins of a large three-aisled basilica, dated to the 10th century. Excavations prooved that it replaced an earlier basilica, dated to the 6th century. This was probably the catholicon of the first monastery founded on the site.
The monastery was founded in the Early Christian period, on a low hill to the SW of the present site and was dedicated to the Entry of the Virgin to the Temple. Remains of two successive basilicas, dated to the 6th and the 10th century, respectively, have been uncovered. The complex seen today was erected in the 11th century and remained in use during the Turkish occupation. The monastery had a famous, rich library which was moved to the Metropolis of Athens and destroyed during the Uprising of 1821.
Excavations were conducted in 1958 on the hill to the SW of the monastery and revealed the ruins of a 6th-century basilica beneath the 10th-century basilica.
In 1952 the Athens Society of Friends of the Trees undertook the restoration of the church to its original, 11th-century form.
An educational programme designed for children, hopes to acquaint them with the monument. 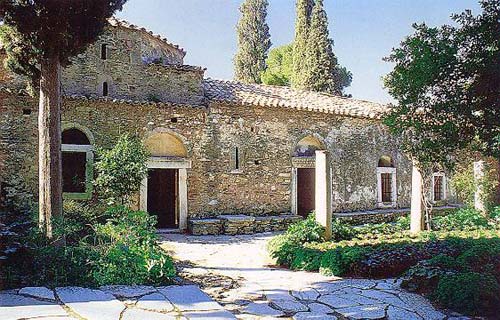 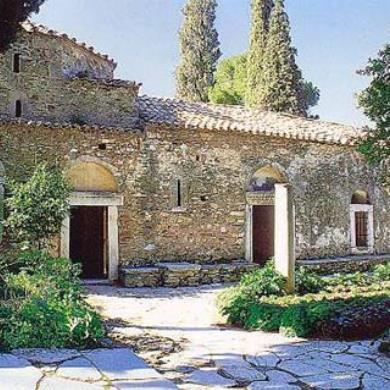 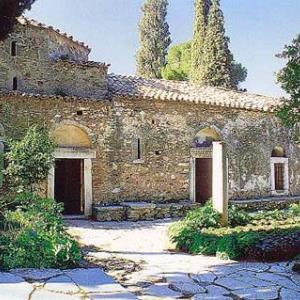