The castle of Palamidi lies on a high hill (216m. a.s.l.) to the east of Acronauplia which was first fortified by the Venetians during the second Venetian occupation of the area (1686-1715). It is a typical baroque fortress, based on the plans of the engineers Giaxich and Lasalle. In 1715 it was captured by the Turks and remained under their control until 1822, when it was liberated by the Greeks.
Small-scale restoration work has been carried out on the walls. The 5th Ephorate of Byzantine Antiquities recently restored the retaining wall of the castle and rebuilt the crumbling parts at the south end of the fortification.
The most important monuments of the site are:
- The Castle. Venetian defensive structure dated to the beginning of the 18th century. It consists of eight bastions surrounded by walls. A long stairway reinforced with small battlements starts at the foot of the NW slope and leads up to the fortress on the top of the hill.
- The church of St. Andrew, built in one of the bastions of the fortress. It is a barrel-vaulted church with the 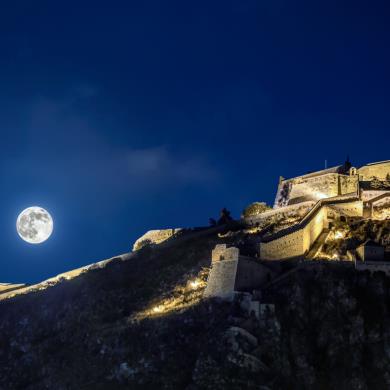 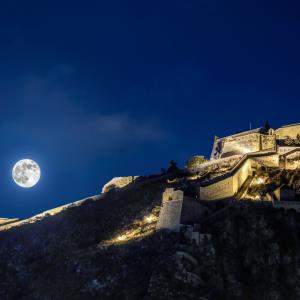