Castles & Fortresses, Archaeological site
Address: 48200 NEA KERASSOUNDA , PREVEZA , GREECE
Tel.: +30 26820 89890
URL: http://odysseus.culture.gr/h/3/gh351.jsp...
E-mail: lgepka@culture.gr
Bouchetion was one of the colonies of the Eleans in Northwestern Greece. The settlement was quite extensive in the first half of the 4th century BC and reached its highest point of prosperity in 343/2 BC. Bouchetion was among the 70 cities of Epirus destroyed by the Romans, while after the foundation of Nikopolis, the site was gradually abandoned. Much later, perhaps in the 9th but most definitely in the 13th or 14th century AD, a smaller city was established on the same site and the old fortification walls were repaired and reinforced.
The only visible monument on the site is the fortification, in which four architectural phases are distinguished:
The early phase (A) is represented by the isodomic circuit wall of the acropolis on the top of the hill, with a total length of 4.50 m., surrounding an area of 9.000 sq.m.
In the second phase (B), the north slope of the hill was protected with a polygonal wall which descended to the foot of the hill. The total perimeter of the wall reached 730 m. and the area surrounded was doubled (18.000 sq.m.).
In the third phase (C), a new polygonal wall was built, enclosing part of the settlement on the NE slope of the hill, that is, an area of another 2.000 sq.m. The total perimeter of the wall came up to 1.000 m. and the area surrounded reached the 37.000 sq.m.
In the Roman period (phase D), the walls were rebuilt in the upper section, after a destruction which left intact only the lower parts. Further restoration work of the fortification took place in the Byzantine period.
There is not enough evidence for the exact dating of the acropolis and the extensions of the fortification walls, which cover a long period, from the Classical until the Late Byzantine period, when the Despotate of Epirus was established (1204-1430 AD). 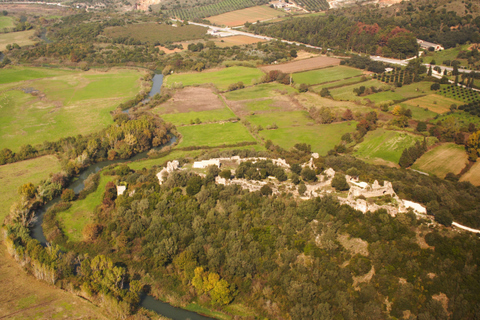 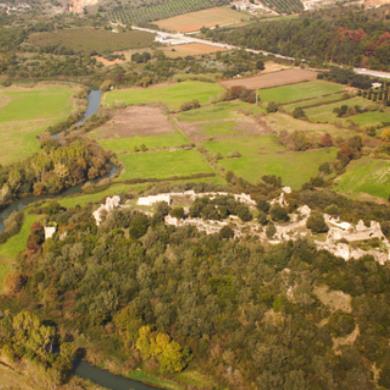 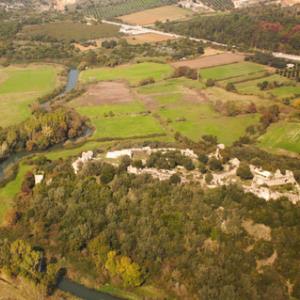