Temple of Poseidon at Sounion

Temple of Poseidon at Sounion

The sanctuary at Sounion is one of the most important sanctuaries in Attica. Sporadic finds point to the conclusion that the site was inhabited in the prehistoric period but there is no evidence of religious practice in such an early date. "Sounion Hieron" (sanctuary of Sounion) is first mentioned in the Odyssey, as the place where Menelaos stopped during his return from Troy to bury his helmsman, Phrontes Onetorides. Finds dated to the 7th century BC onwards increase in number, indicating the existence of organized cult on two points of the promontory: at the southern edge where the temenos of Poseidon was situated, and about 500 m. to the NE of it, where the sanctuary of Athena was established.
Important votive offerings were dedicated during the 6th century B.C., but the architectural form of both sanctuaries remained unpretentious until the beginning of the 5th century B.C., when the Athenians initiated the construction of an imposing poros temple in the temenos of Poseidon. The building was never completed, though, as both the temple and the offerings were destroyed by the Persians in 480 BC. In the following decades, Sounion, like the rest of Attica, flourished, and an important building project was undertaken at both sanctuaries. At the end of the 5th century and during the Peloponnesian War, the Athenians fortified Sounion cape. From the 1st century BC. onwards, the sanctuaries gradually declined and Pausanias, who sailed along the coast of the promontory in the mid-2nd century AD, mistook the prominent temple on the top of the hill as the temple of Athena.
The site of the temple was known in the following centuries, as is proved by descriptions of modern travellers, who visited Sounion before the excavations started. Several of them, carved their names on the ruins, e.g. Lord Byron.
Restricted excavations in the sanctuary of Poseidon were conducted in 1825 by the Dilettanti and by the German architect W. Doerpfeld. Systematic investigation was undertaken between 1897 and 1915 by the Athens Archaeological Society, under the direction of V. Stais, with the collaboration of A. Orlandos. Since 1994, the Archaeological Society has been carrying out excavations at the Fortress.
The monuments seen on the site are the following:
The Temple of Poseidon
At the end of the Archaic period an imposing temple was constructed in the position of the Classical one seen today, but it was slightly smaller in dimensions. It was Doric, made of poros, with an external colonnade of 6 x 13 columns, and an internal one which supported the roof. Its construction was interrupted by the Persian invasion and the temple remained unfinished. The later temple, that is preserved today, was also Doric, with 6 x 13 columns, made of Agrileza marble, but without an internal colonnade. The stylobate measured 13,47 x 31,12 m. It was constructed in 450-440 B.C. and, according to another theory, was the work of the architect who had also built the Hephaisteion ("Theseion") in the Ancient Agora of Athens, the Temple of Nemesis at Rhamnous, and the Temple of Ares which was probably erected in Acharnes. The sculptural decoration of the temple, made of Parian marble, is preserved in poor condition. The frieze of the east side depicted Centauromachy, and the east pediment (of which only a seated female figure is preserved) probably depicted the fight between Poseidon and Athena for the domination of Attica. The two antae of the east side and several of the columns of the east part of the temple are still preserved today, while the west is completely destroyed.
The Fortress
Sounion cape was fortified in 412 B.C. during the Peloponnesian War, in order to control and secure the ships carrying cereals to Athens. The use of various materials and construction techniques is probably the result of repairs and additions made during the Chremonideios War and the following years (266-229 B.C.). The sanctuary of Poseidon occupies the SE end of the fortress. The wall starts at the NE corner, extends to the north and turns to the west. Shipyards for the sheltering of two war ships were constructed on the coast, at the west end of the north branch of the fortification. Inside the fortress, excavations have brought to light part of a central street, remains of houses, and water cisterns.
Sanctuary of Athena
It is situated on a hill 500 m. to the NE of the Sanctuary of Poseidon. The area was evened off and enclosed with a poros polygonal circuit wall. Inside the enclosed area were erected the Temple of Athena, a smaller temple to the north, and altars. A deep pit on the SE side of the temenos was used as a deposit for the Archaic offerings destroyed by the Persians. The oval peribolos to the NW of the temenos has been identified as the "Heroon of Phrontes". The Temple of Athena has a rectangular cella, bearing four Ionic columns at the centre to support the roof. Today the monument is only preserved at the level of the foundation, along with the cult statue base on the west side of the cella. One of the peculiarities of the temple, mentioned also by Vitruvius, is the existence of an outer colonnade only on the east and south sides. Some scholars consider that the temple of Athena Sounias was reconstructed after the mid-5th century B.C., while others believe that the cella was built during the Archaic period, was repaired after the Persian destructions, and the colonnade was added in the middle of the 5th century BC. A second peculiarity of the sanctuary is the placement of the altar to the south of the temple. 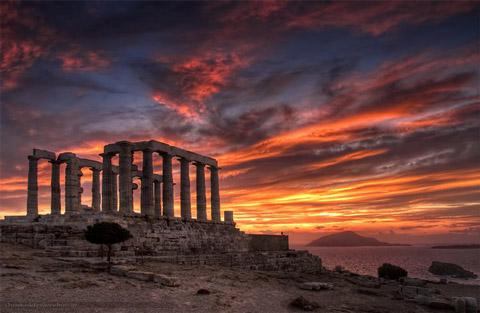 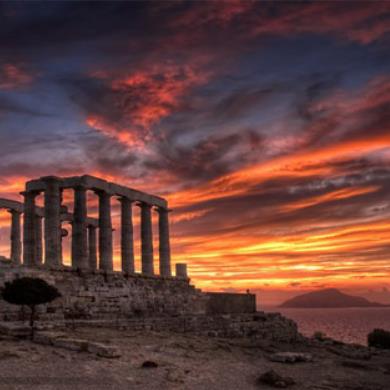 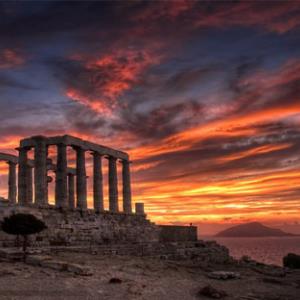