Church of Panaxiotissa (Dormition of the Virgin) - Greek Ttavel Pages

Church of Panaxiotissa (Dormition of the Virgin)

Church of Panaxiotissa (Dormition of the Virgin)

Churches, Byzantine & Post-Byzantine Monuments
Address: 30014 GAVROLIMNI , NAFPAKTOS , GREECE
The church belongs to the domed, cross-in-square type and, more specifically to the "Helladic transitional type". The walls are built of limestone blocks enclosed with bricks. The high, elegant dome is richly decorated with brick and tile ornaments on the outside. Few traces of the wall paintings are preserved on the interior. The church has three entrances in the narthex but very few windows are opened in the walls.
The church was the catholicon (main church) of a Byzantine monastery, dated by Orlandos to the end of the 10th century. On the basis of its architectural features (tripartite narthex, carefully built wall masonry, decoration of the dome, proportions of the window of the central apse), it is more securely dated to the last quarter of the 10th century A.D.
Two trenches opened in 1983 in the foundations of the church revealed the original threshold of the north door and its foundation, as well as numerous burials. The foundations of the building and the outer pavement were restored in 1983. Later, in 1990, the roof was reconstructed and the joints in the wall masonry were repaired. By that time the restoration of the monument was completed.
In a recent investigation of the area around the church, 13 fragments of sculpture were recorded. They are dated to the Early Christian period and they bear evidence for the existence of an Early Christian basilica on the site. 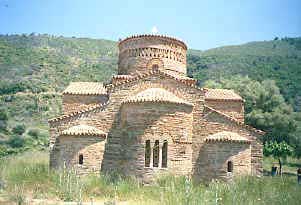 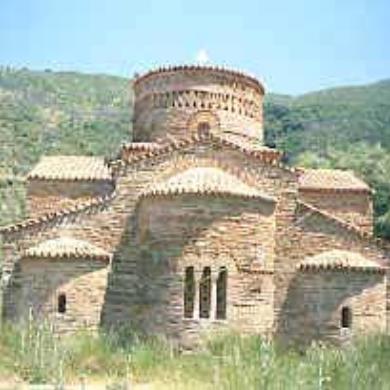 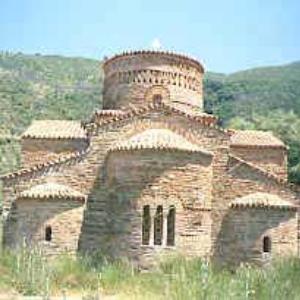