Closed for renovation until 2015

Among the most important exhibits of the museum are:
• The "Gorgo pediment". Monumental pediment showing the mythical Gorgo, from the west facade of the Doric temple of Artemis. It is the oldest preserved large stone pediment in Greece, dated to 590-580 BC.
• The "Lion of Menecrates". Funerary statue of a crouching lion, found near the cenotaph of Menecrates. This imposing piece is the work of a famous Corinthian sculptor of the Archaic period. Dated to the end of the 7th century BC.
• Left part of an Archaic pediment from the area of Figareto. The impressive representation depicts a scene of a Dionysiac symposium. Dated to 500 BC.
• Base and part of the body of a Late Archaic kore. It was found during the excavation of a pottery workshop in the area of Figareto.
• Terracotta statuettes of Artemis, found in large quantities in the small sanctuary of Artemis at Kanoni.
• Head of a small kouros, made of Kerkyraean poros (limestone). It was found in 1966, during excavations at the estate of Mon Repos. Dated to 535-530 BC.
• Torso of a Late Archaic kouros, found during the excavations at Figareto. Dated to ca. 525 BC.
• Bronze statuette of a running young reveller (commastes). In his left hand he holds a rhyton (libation vessel). It is probably the product of a Laconian workshop.
• Marble torso of Apollo, copy of the original statue of "Parnopios Apollo" made by Pheidias (the type is known as the "Kassel Apollo"). Dated to the 2nd century AD.
• Four cases with coins found in excavations at various sites of Corfu. 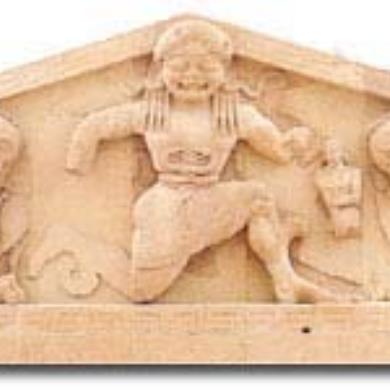 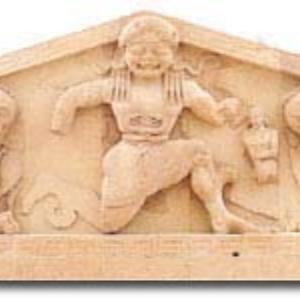