The museum is housed in one of the buildings of the acropolis, inside the castle of Ioannina. The central section was built in the 1960's and originally functioned as a Royal Pavilion.
The museum was opened to the public in 1995. The collection of the silver items is housed in a separate 19th century building on the acropolis, and the exhibition is going to be arranged in several more buildings of the acropolis, as well. The museum contains collections of Early Christian and Byzantine sculptures, excavation finds from Arta, pottery, manuscripts and early editions of printed books, post-Byzantine icons and silver items.
The most important exhibits are:
- Fragment of a wall painting from the church of the Holy Virgin (Kokkine Ekklesia) at Voulgarelion, Arta. Part of the representation of Judah's treason is depicted. The faces of the central composition are better preserved. Dated to 1281.
- Marble fragment of an iconostasis (altar screen), from Glyke. It is decorated with relief representations of birds on the front side and floral patterns and interlaced cicles on the lower surface. Dated to the end of the 12th or the beginning of the 13th century.
- Glazed clay icons from the east pediment of the church of St. Basil in Arta. A pair of icons with the representations of the Crucifixion and the Three Hierarchs date to the 14th century A.D.
- Left chancel door from the church of Saint Nicholas at Perama. Representations of an angel, the Annunciation, and Apostle Peter are carved in wood. Dated to the 15th century.
- Printed book, the first edition of the comments of Simplicius on Aristotle. It was printed in 1499, by Zacharias Callierghis, in Venice in the printing establishment of N. Vlastos.
- Manuscript Gospel from the Molyvdoskepastos Monastery. The silver-cut decoration represents Crucifixion on the one side and Dormition on the other. Dated to 1575 A.D.
- Icon painted by the Cretan artist Theodoros Poulakis. In the middle, Saint John the Baptist is depicted in full length, and scenes from his life are painted in the frame. Dated to the second half of the 17th century.
- Icon depicting St. Catherine's engagement. In the lower part, the donors are depicted in the gesture of deisis (praying) while in the frame a Greek inscription is discernible, mentioning the date 1688. This icon is undoubtedly the product of a Western workshop.
- Silver benedictory cross with wooden carved nucleus. It is covered with silver and has attached wire palmettes. At the base it is surrounded by two symmetrical spiral antennae, covered with ivory. It bears the inscription: posession OF DEMETRIOS, THE PRIEST 1800.
- Wall painting from a rich house (archontikon) in Ioannina representing the battle of Constantine the Great at the Milvian Bridge. It was painted by Alexandros Demiris, in the 19th century. 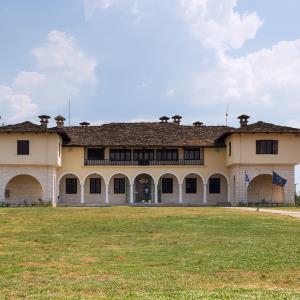