Archaeological site
Address: 25010 EGIRA , ACHAIA , GREECE
URL: http://www.oeai.at/eng/ausland/aigeira.h...
Ancient Aigeira (in the province of Achaia) lies on the north coast of the Peloponnese - roughly opposite Delphi - at the opening of a valley which leads directly into the Corinthian gulf; together with Pellene, it represents the easternmost city of the ancient region of Achaia.
Excavated finds revealing human activity and dating to the advanced late neolithic period have been found on the acropolis hill, which lies 416 m. above sea level; while excavated remains, in the same location, of a late Mycenaean settlement of the early 12th century B.C. constitute the beginning of a continuous settlement. The remains of a mansion and abundant finds point to a settlement structure, which developed during the period of foreign migrations and can be situated in the late Mycenaean koine.
In the following period, perhaps already after the 10th century B.C., an early Greek sanctuary was erected on the acropolis, a sanctuary which was continually rebuilt and which continued to be used into the 4th century B.C. A wide spectrum of votive objects, as well as architectural evidence such as foundation walls and painted roof tiles, attests to the development of this sacred centre as the nucleus of the city of Aigeira, a city which, at least in the early period, is to be connected with the "Hyperesia" of Homeric tradition.
For an evaluation of Aigeira in its prime, that is, at its greatest extent measuring ca. half a square kilometer and surrounded by a circuit wall, the excavation results from the theatre terrace in the north, beneath the acropolis hill, are particularly instructive.
In the course of a thorough new foundation in the hellenistic period, at about 280 B.C., a monumental, public, sacred civic centre was achieved through the construction of a theatre and adjacent small temple; this area was continually rebuilt up until the early Imperial period with further temples and a cult building dedicated to Tyche. A period of usage prior to that of the theatre-complex is not to be ruled out for an additional sanctuary to the north, from which foundations of two further temples are preserved.
In addition to the preserved architectural elements, the sculptural finds of the 2nd c. B.C., amongst them an over-lifesize head of Zeus by the sculptor Eukleides, and a draped female conforming to the figure of Tyche, as well as the mosaic floors of the small temples, attest to the high quality of the fittings of this space and its buildings.
It is therefore not surprising that even in the 2nd c. A.D. this ensemble attracted the attention of the travel writer Pausanias, whose short description absolutely corresponds to the excavated finds.
Two additional public spaces, which currently cannot adequately be classified, nevertheless at least provide evidence for the complex urban articulation of the city. Corresponding to this is an extensive infrastructure, which above all has to do with structures for the provision of water. An aqueduct system which can be traced for a number of kilometres and which, coming from the south, was carried over wide stretches through rock tunnels, guaranteed the city's water supply. This system was continually rebuilt and remained in use from the pre-hellenistic up until the post-antique period.
Complementing the public and sacred centre, remains of a domestic building were cut into a terrace directly to the north-west of the acropolis. An andron, decorated with pebble mosaics and fitted with 11 klinai, attests to the representative pretension of this building, whose foundation date can provisionally be placed in the 4th c. B.C. and which in any event predates the construction of the complex of buildings at the theatre. In spite of sporadic evidence, the situation of Aigeira for the Roman Imperial period and late antiquity is at the moment not adequately known.

Research at Aigeira
The discovery of the site and the earliest archaeological investigations date back to Otto Walter, who, with excavations at the theatre terrace in 1916 and 1925, initiated archaeological research at Aigeira which would have an impact on the future. As the unstable political situation in Greece only allowed two short seasons, the research presence of the Austrian Archaeological Institute (?AI) at Aigeira was in this fashion founded.
The excavation campaigns, from 1972 to 2001 carried out under the auspices of the central OAI in Wien and since 2002 conducted by the Athens Branch, have brought to light fundamental evidence concerning the historical development of this Greek settlement from the late Bronze Age up to the most recent past, and the appraisal of its material culture.
W. Alzinger led the greatest part of the field research (from 1972-1988), with systematic surface excavations on the acropolis and on the theatre terrace, turning aside briefly for excavation in the plain of Palati north of the city. Besides numerous individual studies on material such as sculpture, ceramic finds, coins, and the like, as well as the study of the theatre by S. Gogos, a comprehensive presentation of the historical development of Aigeira has resulted from these investigations. The remains from the prehistoric and Bronze Age periods found on the acropolis are currently the focus of intensive research by E. Alram-Stern (OAW, Myceneaen Commission) and S. Deger-Jalkotzy (OAW, Mycenaean Commission). Analysis of the ceramic finds from the Greek historical period from the acropolis excavations is being carried out by G. Schwarz (IKA Graz). Preliminary research for the final publication of the building elements and the remains from the so-called Tycheion is the work of T. Hagn (IKA Vienna).
Between the years 1990-1997, A. Bammer pursued a comprehensive urban survey, and investigated numerous areas of the city via intensive survey, measuring, and cleaning. These studies incorporate the re-addressing of questions concerning the water supply, the orientation of numerous extensive public areas, the photographing of architectural remains from the Byzantine period, and the study of the modern remains of the so-called "Houses of the Raisin Pickers". A surface excavation in the plain of Zaoussis led to the partial exposure of the foundations of two temples north of the theatre terrace.
The most recent excavations by G. Ladstatter (from 1998) continue the study of the water supply of Aigeira, in connection with hydrogeological studies, and concentrate on the excavation of the domestic buildings in the plain of Solon to the north-west of the acropolis.
A selection of objects from the excavations is presented in the Archaeological Museum at Aigion, while the head of Zeus is displayed in the National Museum at Athens. The impressive ruins of the theatre with its connected temples, two of which are protected by a modern shelter, provide an architectural impression of the hellenistic building ensemble. 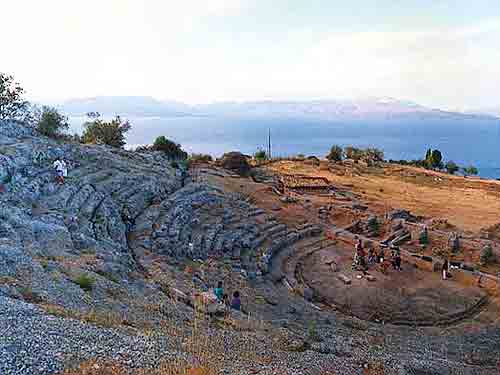 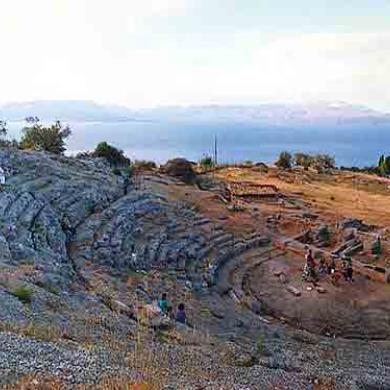 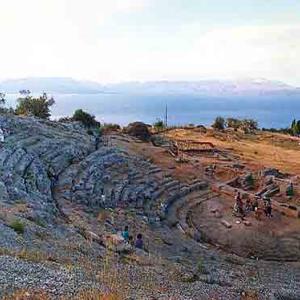