Psathoura lighthouse was built in 1895, after the sinking of a Danish ship at the area. Stonemasons from Skopelos constructed it following the designs of some French mechanics. At the construction they used stones from the Psathoura, while marble steps and some of easy carved stones are the only materials that were transferred there from Skopelos. The height of its tower is 26 meters and its focal plane 40 meters.

At first the lighthouse was operated by a system that burned a mix of air and petroleum and it was necessary the constant presence of the lighthouse keeper. Then the luminescence was continuum to all the directions, very strong and blinding, and reached to 19 miles far.

During the 2nd World War it was turned off and re-operated in 1945. Until 1987, when the petroleum operating system was replaced by electricity, it was required the presence of the lighthouse keeper. In 1987 the lighthouse was transformed to solar automatic supervised. The send out light, today, is provided in 6 packs from a halogen lamp and its luminescence range reaches to 17 nautical miles, a fact that makes it one of the bigger lighthouses in the Aegean Sea.

In 2001 the lighthouse was listed historical monument by the Ministry of Culture.

Psathoura is the northern island of Sporades island complex. Its island came up, probably, from its shape, as it looks like a mat in the middle of the sea. Before lighthouse’s building the island was uninhabited. Some ruins that are spread on the island are probably ancient houses and fortresses leftovers. 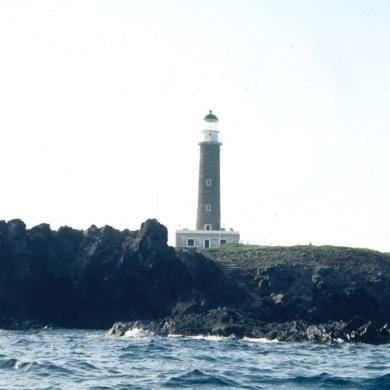