Black-figure epinetron, which was found at Amarynthos and dates from the end of the 6th century B.C, Archaeological Museum of Eretria

The Archaeological Museum of Eretria was built in 1960, while the current building is the result of enlargement and renovation that took place in 1989-1991 by the local Ephorate of Antiquities in collaboration with the Swiss School of Archaeology. The latter also funded the project.
The exhibits cover all the periods of antiquity and derive from the wider region. Among the most important are the finds from the protogeometric cemeteries of Lefkandi and Eretria and the sculptures from the temple of Apollo Daphnephoros.

Among the most important exhibits of the museum are:
- Clay alabastron of the late Mycenaean period (1200-1000 BC) from Lefkandi. It bears representation of griffins, roes and deers.
- The "Kentaur of Lefkandi" (950-900 BC). The clay protogeometric figurine was discovered broken in two parts, each deposited in a different grave. It is the earliest representation of the mythical creature composed of part human and part horse.
- Necklace made of faience beads representing Isis and Horos (1050-900 BC). Important specimen of minor art, the necklace was found at the cemetery of Lekfandi along with other valuable items imported from Cyprus and Phoenicia, finds that confirm the interactions of Lefkandi, located in the wider region of Eretria, with Cyprus and Phoenicia during the early historic times.
- Funerary amphora (800-700 BC). It contained the cremated bones of a child. In terms of shape and decoration, this pot is a characteristic product of the Euboean pottery workshop.
- Funerary black-figure amphora (560 BC) from the necropolis of Eretria. On the main side it depicts the fight between Herakles and Kentaurs, while on the other side the "Potnia Theron" ("Mistress of the Animals"), the Minoan deity which is considered as a prodromic form of the goddess Artemis.
- The pedimental sculptural complex of Theseus and Antiope from the temple of Apollo Daphnephoros (510-500 BC). One of the most important examples of the Late Archaic period, it represents the abduction of the queen of Amazons Antiope by Theseus, the legendary king and founder of Athens. The narrative scene also included the goddess Athena, which was the central figure, and several fighting Amazons. The decoration of the temple is considered as a work of the Athenian sculptor Antenor, to whom is also attributed one of the most renowned Kore statues of the Acropolis museum, the "Antenor Kore".
- Panathenaic amphora (363-62 BC) found during the excavation of a house in Eretria. These large vessels, full of oil, were given as prizes to the winners of the Panathenaic Games. They bore a typical pictorial decoration, with the armed goddess Athena on the main side, while on the rear side was depicted the sport in which the awarded athlete won - in the case of the Eretria amphora wrestling.
- Terracotta Gorgoneion (380-323 BC), decorative element from the so-called "House of Mosaics" of Eretria. Gorgoneion was the depiction of the head of Medusa Gorgo, the mythical creature whose image was considered in classical antiquity as evil-averting.
- Black-figure epinetron depicting symposium scene (end of the 6th century BC) from Amarynthos. One of the most unusual pottery shapes, the epinetron, was placed over the thigh during the preparation of wool for weaving. 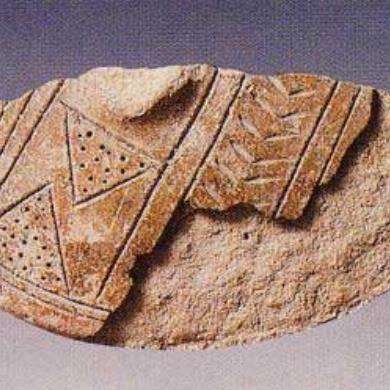 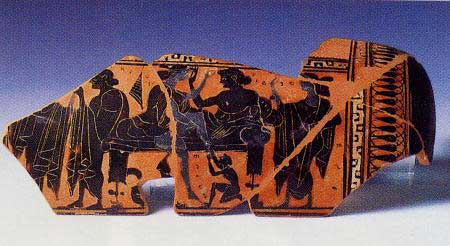 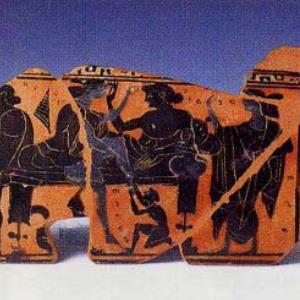