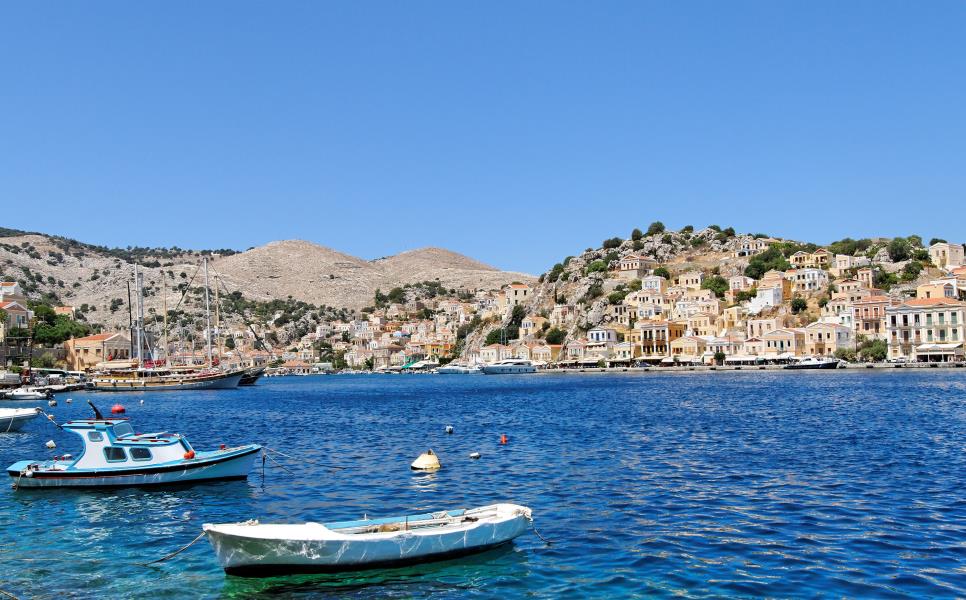 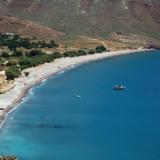 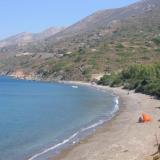 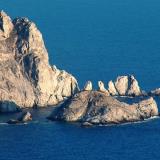 One of ουr Dodecanese which Iacks neither physical allure nor historical eminence. It has preserved its immemorial name down through the centuries and carries it today with pride. Foreign attempts to change it to "Piscopi" did not find the required response in the island’s people and so failed.
Its mass rises up between Rhodes and Kos, roughly in the middle between these two islands. Round about and closer by it is in the company of Nisiro (NW), Halki (SE) and Simi (NE). Το its north stretches the Asia Minor Knidos (Kavo-Krios). Further along to its west is Astipalia and to the south it is watched over by Karpathos and beyond this Kassos.
Mountainous for nearly its whole area (approximately 63 square km) its only significant flat region is the plain of Megalo Horio (covering roughly 1/10 of the island’s surface area) whose slopes and valleys were once cultivated its inhabitants occupied chiefly in a traditional agricultural economy, whose basic charecteristic was Iarge households that owed their existence to the indivisibility of the estates, as required by the Iocal custom of primogeniture.
The aspect of its mountains (the highest of which, Profiti Ilia, rises 654 m in the western part of the island), bare and rugged, with awe-inspiring precipices, soar upwards at their peaks or plunge downwards into the sea, alternate with Iandscapes radiating tranquillity and calm.
The picturesque beaches of Livadion, Eristou, Plaka, Skafi, Lethron of St. Antonis, its ravines and gorges with their water sources and the cold headsprings; and even in the remote parts of the island at Skafi, Vathia Pigi, Agio Pantaleimona, Potamo, at Despoti water. the verdant plain of Megalo Horio, aIl ginu a their own distinctive picture of the island’s nature.
Its climate is dry and salubrius. The relatively high summer temperatures are alleviated by northerly breezes that cool the island. Ιn winter though, whenever they blow, they bring to the affected areas somewhat colder weather from the mountains of Asia Μinor opposite.
The first inhabitants, that Ieft traces from their habitation οn the island, are thought to belong to the stone age.
Somehow their Iives had become intertwined with that of the elephants that were cut off there and in time became pygmies adapting to the Iimited diet that the place offered. Today we find the bones of these agreeable proboscians in the Harkadio caverns beside the Missaria spring towards the frontier between Megalo Horio and Mikro Ηοriο , where their existence came fuil circle about 4,500 to 3,500 years ago, according to the calculations of the experts.
Ancient people, Karolelegians, Pelasgians, Minoans, Μyceanians Iater οn make their presence known οn the island before the final settlement of the Dorians when Tilos passes into the great history of Hellenism. It too is a genuine part of it, has Iived ail its adventures, has flourished with it; enshaved it finally gains its Iiberty with the end of the Second World War , that brought the Dodecanese back into the bosom of the motherland.
This new phase in the history of Tilos found it with three towns: Megalo Horio (the island’s capital that kept the tittle "municipality") Mikro Horio and the Livadia joined together in a second municipality (indirectly called a parish) and with an overall permanent population of 1,102. today with its permanent residents at around 300 and the numbers following a continuous downward trend, Mikro Horio lies deserted.
Visitors to the island can see and enjoy many things: its almost unspoilt nature, clean sea, cool waters, symbols of its piety (first among these the monastery of St. Pan....), memories of its history, its quiet Iife, its people with their vivid traditional performances, their unaffected manners and pleasant disposition. One of the island’s former features though a real aesthetic delight - they wiil not be fortunate enough to enjoy and admire: the magical aspect presented by the blossoming almond trees in the Megalo Horio plain as they cast over it, come January and February, the exceptional pale rose veil of their flowers the whole framed by the emerald green slopes with the azure sea of Eristou as a backdrop. Whoever had the good fortune to witness this sight that gave Tilos the name "island with the almond trees" never forgot it. In the place of this vision though came something eise, just as distinctive and magnificent: the islands pygmy elephants whose study wiIl show as we expect by faithfully reconstructing their skeletons showing how these animaIs were in that time. This spectacle, unique for being in Greece but aiso one of the most remarkable in the world and connected to that great paleontological discovery that brought to Iight these important finds, wiIl justly give a new name to Tilos, making now the island better known as the Elephant Island.