Many civilizations have inhabited this small Aegean island, near Asia Minor, since the 3rd millennium BC. The remains of Pythagoreion, an ancient fortified port with Greek and Roman monuments and a spectacular tunnel-aqueduct, as well as the Heraion, temple of the Samian Hera, can still be seen.

Samos was the leading maritime and mercantile power in the Greek world in the 6th century BC, and this importance is reflected in the extent and richness of the archaeological remains, which are largely untouched by subsequent development. The site is an area on the north-east coast of the island that is clearly defined by the surrounding mountains. It consists of the ancient city (Pythagoreion) and the classical Temple of Hera (Heraion). Pythagoreion is a classic site from the period of Greek colonization, situated round a good natural harbour on a peninsula that is protected by steep mountains behind it. It also had the advantage of being very close to the mainland of Asia Minor. The earliest finds are pre-classical; dating back to the 4th or 3rd millennium BC, but the main settlement began in the 16th century BC, when it was colonized by Minoans from Crete, later to be supplanted by Mycenaeans.

The ancestors of the classical Samians arrived from the Epidauros region in the 11th century BC, following the turmoil of the Trojan War. By the 6th century BC, Samos had become a major nautical power in the eastern Mediterranean, with close trade links with Asia Minor and the Greek mainland. It was strong enough to establish trading colonies on the coast of Ionia, in Thrace, and even in the western Mediterranean. Samian political influence waned after the island was conquered by the Persians at the end of the 6th century BC, but it continued to be an important mercantile city throughout the Hellenistic and Roman periods. The city was sacked by Germanic peoples in the 3rd century AD and never properly recovered thereafter. Samos alternated between Byzantine, Turkish, and Venetian rule for many centuries, not being fully united with Greece until 1910.

The fortifications round the ancient town date back to the classical period, with Hellenistic additions. Excavations over many years have revealed a great deal of the street plan of the ancient city, together with its aqueduct, sewage system, public buildings, sanctuaries and temples, agora, public baths (Roman), stadium and town houses (Roman and Hellenistic).

One of the most dramatic and famous features is the Eupalineio, a tunnel running for 1040 m through the mountainside to bring water to the city, the work of Eupalinos of Megara in the 6th century BC. It is described by one authority as "a miracle of ancient surveying [which] was begun at both ends running level, and the miners met in the middle with only the smallest of errors." The technological mastery of the Eupalineio served as a model for engineering and public works. 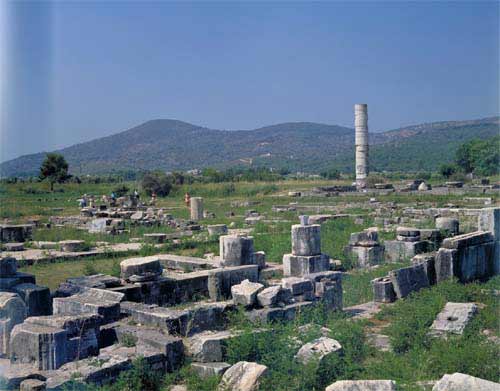 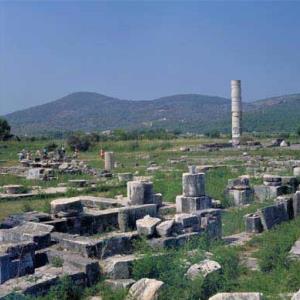 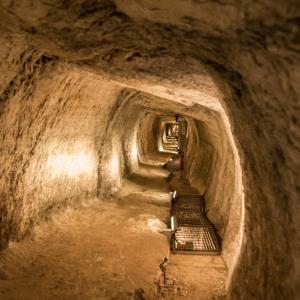