Kardamyla is a borough built on the site of ancient Kardamilis at 28 km from the town of Chios. It is divided into two settlements; the upper section is also the older village, spreading at the feet of a steep hill. The houses have an intensely traditional architecture. Narrow streets, curbstone alleys and covered passages are typical local features; just as typical are the houses, mainly built in stone, decorated with flowers and plants. Kardamyla is home to approximately 2000 persons in both settlements. It is the birthplace of freedom fighters Chartoulakis (in the Middle Ages) and Kontanignotis (in the 1821 War of Independence), The Venerable Nikiphoros, historian of the Nea Moni and Georgios Zolotas, historian of Chios, were also born here.
The lower village, called Marmaro, is built on the coast, in the inner part of a beautiful bay at a distance of 2 km from the old settlement. It has many exquisite mansions, built by the many seafarers and ship owners tracing their origins to this place; the people of Kardamyla have always loved the sea on which they worked.
A distinguishing mark of Marmaro is the statue of the Sailor from Kardamyla, work of the sculptor Apartis, set in the harbor square. Walking in the narrow streets of Marmaro is a pleasant experience that will make one feel the typical island atmosphere of Chios. The area has many delightful beaches; Nagos and Yiosonas are considered the best of all. 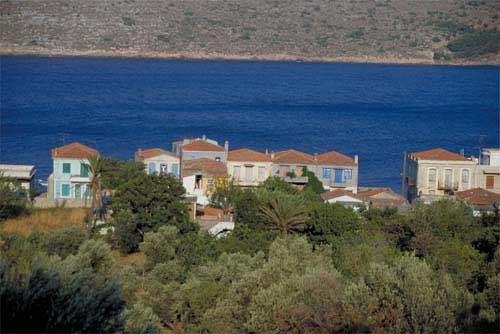 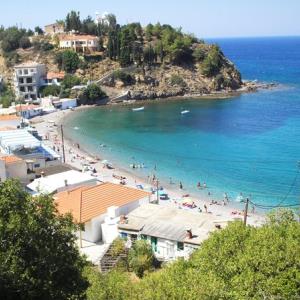