Archaeological site, Cultural heritage
Address: 32200 THIVA , VIOTIA , GREECE
Tel.: +30 22620 27913
URL: http://odysseus.culture.gr/h/3/gh351.jsp...
Several rescue excavations and less systematic work in the area of ancient Thebes yielded an abundance of evidence for the city's history and art. However continuous occupation and the presence of a thriving modern town over the ancient remains rendered impossible a full investigation of the site. Occupation began in Neolithic times (Pyri) and the settlement was already strong in Early Helladic (3000 - 2000 B.C.) and Middle Helladic period (2000 - 1680 B.C.). The city reached its highest point of splendour and power in Mycenaean period (1600-1100 B.C.). Thebes was a considerable settlement in geometric and archaic times and during the classical period gained "the hegemony" over the rest of Greece (371-362 B.C.). After the battle of Chaironeia (338 B.C.) and its complete destruction by the Macedons (335 B.C.). Thebes never regained its former glory and power.
In the years before 1900 only sporadic excavations took place in the area of Thebes. Between 1906 and 1929 A. Keramopoullos excavated remains of the Mycenaean palace and of fortifications on the Kadmeia as well as several mycenaean chamber tombs and the foundations of the Temple of Apollo Ismenios. N. Platon and E. Touloupa (1963-1965) and later other members of the Greek Archaeological Service revealed some important parts of Mycenaean administrative center on the citadel as well as the foundations of ancient and medieval buildings investigated in the Lower town. Quite recently (1993-95) a cospicuous number of clay tablets (c.250) were found in the area of the so-called "Armoury".
Restoration work at Thebes began, for the first time in 1994 with the consolidation and restoration of the monumental chamber tomb of the "Sons of King Oedipus" in the hills of Kastellia. Works continue and will be completed in the few next years.
The most important monuments of Thebes are:
•The mycenaean palace "of Kadmos" (14th-13th c. B.C.). One of the most important mycenaean administrative centres (palaces) of Mainland Greece lays in about the centre of the Kadmeia citadel. Its various wall painted annexes and "departments" covered a great part of the natural hill of Thebes. Parts of the palace were excavated by A. Keramopoullos (1906-1929) and later (1963-1995) by archaeologists of the 9th Ephorate of Prehistoric and Classical Antiquities. Particularly important are the archives in Linear script B, the inscribed stirrup-jars, the "Room of the Treasure" and the "Armoury".
•The Temple of Apollo Ismenios, belongs to one most important cult of Thebes (the other was the cult of Demeter Thesmophoros). It is situated on the pine-covered hill between the cemetery (Aghios Loukas) and the Electran Gates. The temple was excavated by A. Keramopoullos. Its remains belongs in a temple with dimensions 21,60X9,30 m and columns respectively 12X6, built perhaps after the battle of Leuktra (371 B.C.). Before the 4th B.C. temple, there, in the same place a geometric and late an archaic one. From the latter parts of its terracotta superstructure were found.
•The Gates of Kadmeia. From the seven mythological gates of Thebes, whose names (often more than seven) are known from the tradition, only the entrance between the two circular towers of the Electran Gates are preserved today. In the place of Proitides and Homoloides Gates were preserved sections of the Mycenaean wall (excavations 1915 and 1984). The other gates are hypothetically located with the help of the natural exits from the city. The towers of the Electran Gates were excavated by A. Keramopoullos (1908) and were dated in the time of the city's rebuilding by Kassander (315 B.C.). 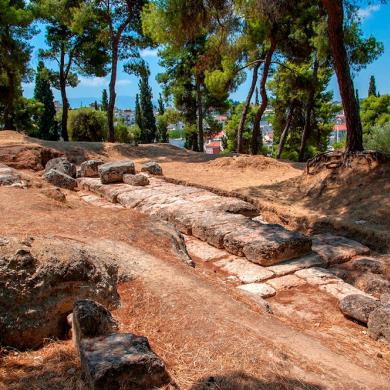 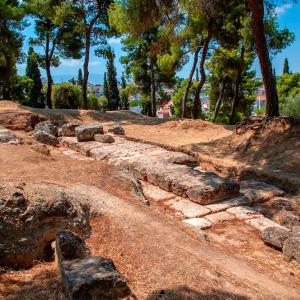