The temple of Athena Polias on the acropolis of Ialysos.

Baptistery of the Early Christian basilica that succeeded the temple of Athena.

Ancient ruins and the restored medieval monastery on the acropolis of Ialysos.

On the lush green hill of Filerimos, once the ancient acropolis of Ialysos, the medieval monastery of Panagia now stands upon the ruins of ancient and Byzantine temples.

The district of Ialysos encompasses the northern part of the island. It was inhabited in the prehistoric period. Remains of a Minoan settlement have been found at Trianta and Mycenaean cemeteries have been located on the surrounding hills of Makria Vounara and Moschou Vounara (1700-1400 BC).

The ancient city of Ialysos extended around the hill of Philerimos, which was the ancient acropolis where there are remains of buildings from the Archaic, Byzantine and Knights' periods. The temple of Athena Polias, which dates to the 3rd and 2nd centuries BC, was built over the site of an earlier Classical temple, to judge from the evidence of a 5th century BC floor and terracotta antefixes found there. The depository on the west side produced pottery and votive offerings dating from the 9th to the 5th centuries BC. In addition to the cult of Athena Polias, there are also references to a cult of Zeus Polias. In the Early Christian period (5th-6th centuries AD) a three-aisled basilica with an atrium was built on the remains of the ancient temple, in the north aisle of which a single-aisled church with a cupola was constructed in the 10th century. In the time of the Franks this site was occupied by a medieval monastery and church.

The more important buildings in the archaeological site include:

The Temple of Athena Polias. This is a Doric amphiprostyle, tetrastyle or hexastyle temple (that is, with a portico of four or six columns at either end) with a pronaos, cella and opisthodomos. In the cella stands the base of the cult statue. Small column drums and walls inside the cella may have belonged to an interior colonnade (3rd-2nd c. BC). Cuttings on the west side of the rock would have been used as depositories for votive offerings or cult purposes.

Doric fountain-house. Two tunnels brought water from the top of the hill to a cistern cut into the rock and closed by a poros isodomic wall in the form of a Π. Lion-head spouts discharged the water from the closed cistern into an open tank, which was enclosed by six pillars with stone panels between them, and from there to a portico of six Doric columns which formed the facade of the fountain-house (4th c. BC). A sacred law with proscriptions for the protection of the fountain-house was carved on one of the pillars.

Church of the Knights' period from the 14th c. with a vaulted roof and two hexagonal chapels.

Baptistery of a three-aisled Early Christian basilica, built over the ruins of the temple of Athena.

Byzantine fortifications. These are on the east side of the hill and constructed with material taken from the ancient temple of Athena. Parts of the repairs made by the Knights are visible.

Ruins of the katholikon of a Byzantine monastery. This is a cruciform inscribed church of the C type, and dates from the end of the 10th to the beginning of the 11th c.

Medieval monastery restored during the Italian occupation. Around the interior courtyard are the rooms of a two-storey building with arched porticos leading to the monks' cells on the ground floor and the Abbot's quarters on the first floor.

Excavations were carried out by the Italian Archaeological School (in 1914 and 1923-1926) during their occupation of the island. The earliest phases of the temple of Athena were excavated as well as the depository containing figurines, pottery and metal objects (9th-5th c. BC). The Doric fountain-house was also excavated and restored at this time. 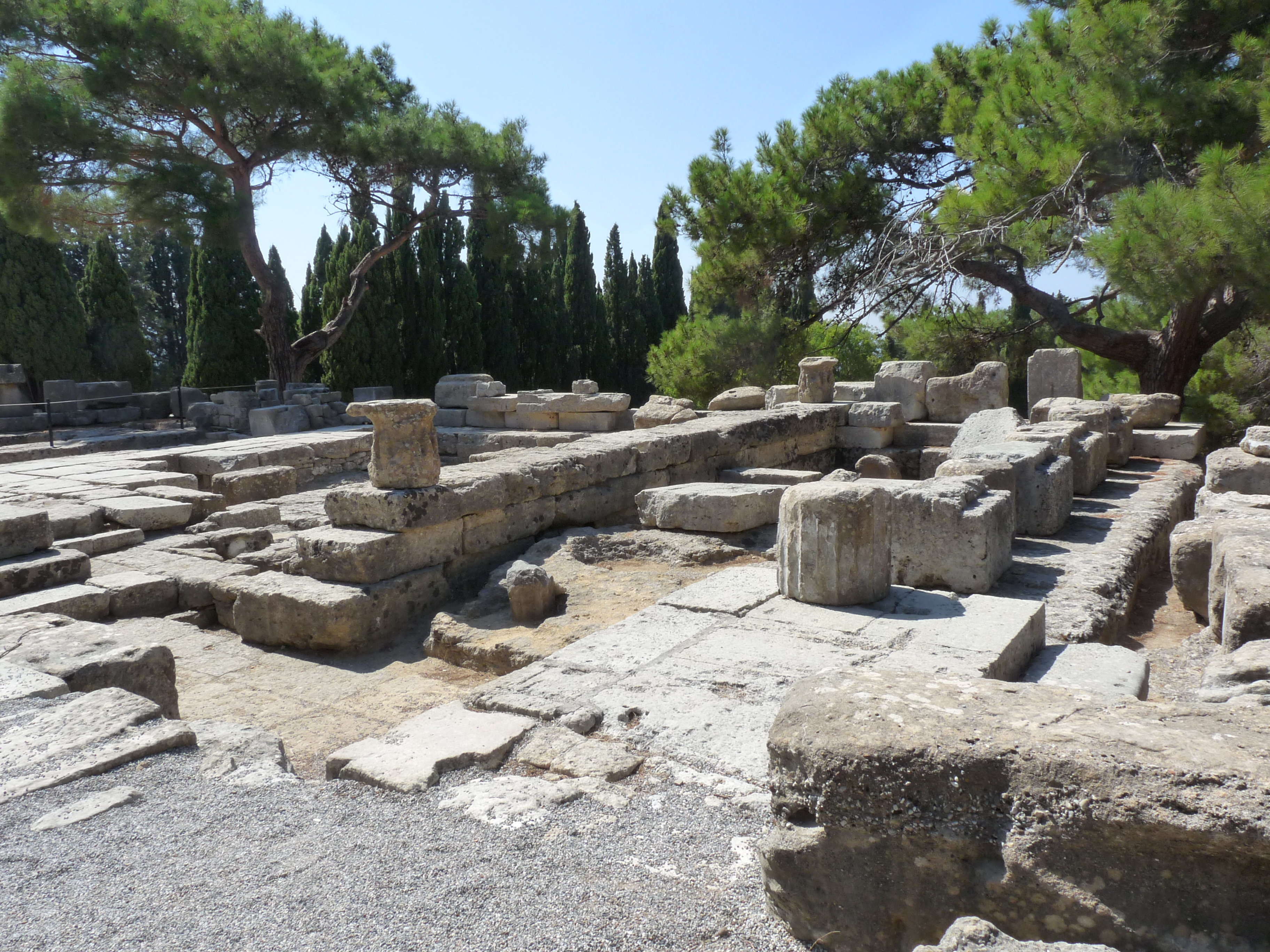 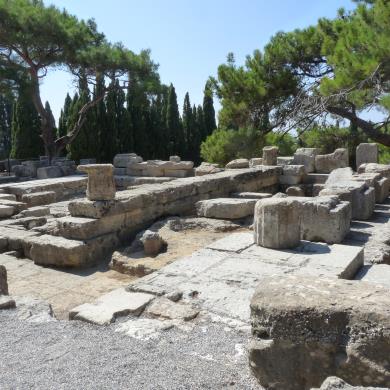 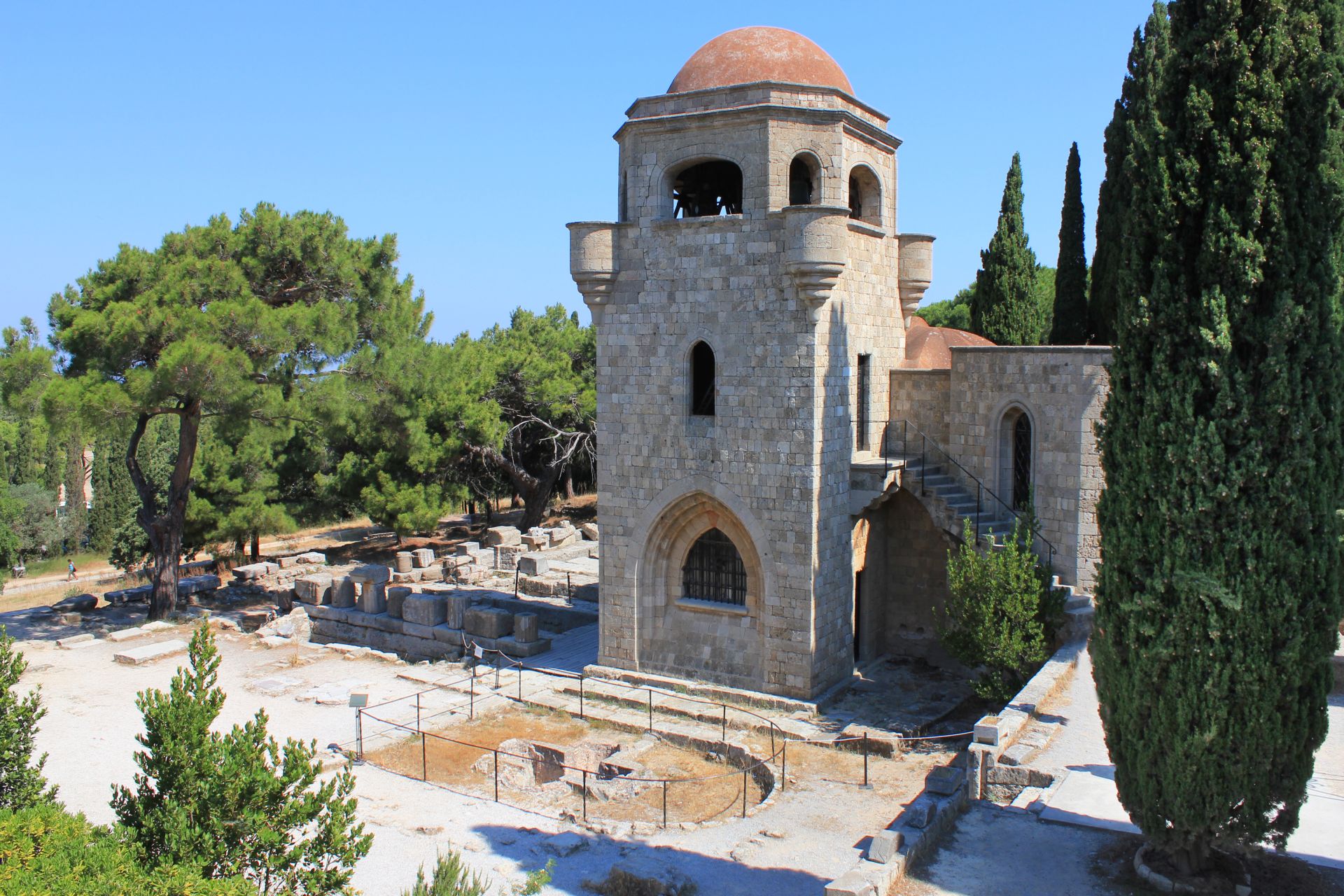 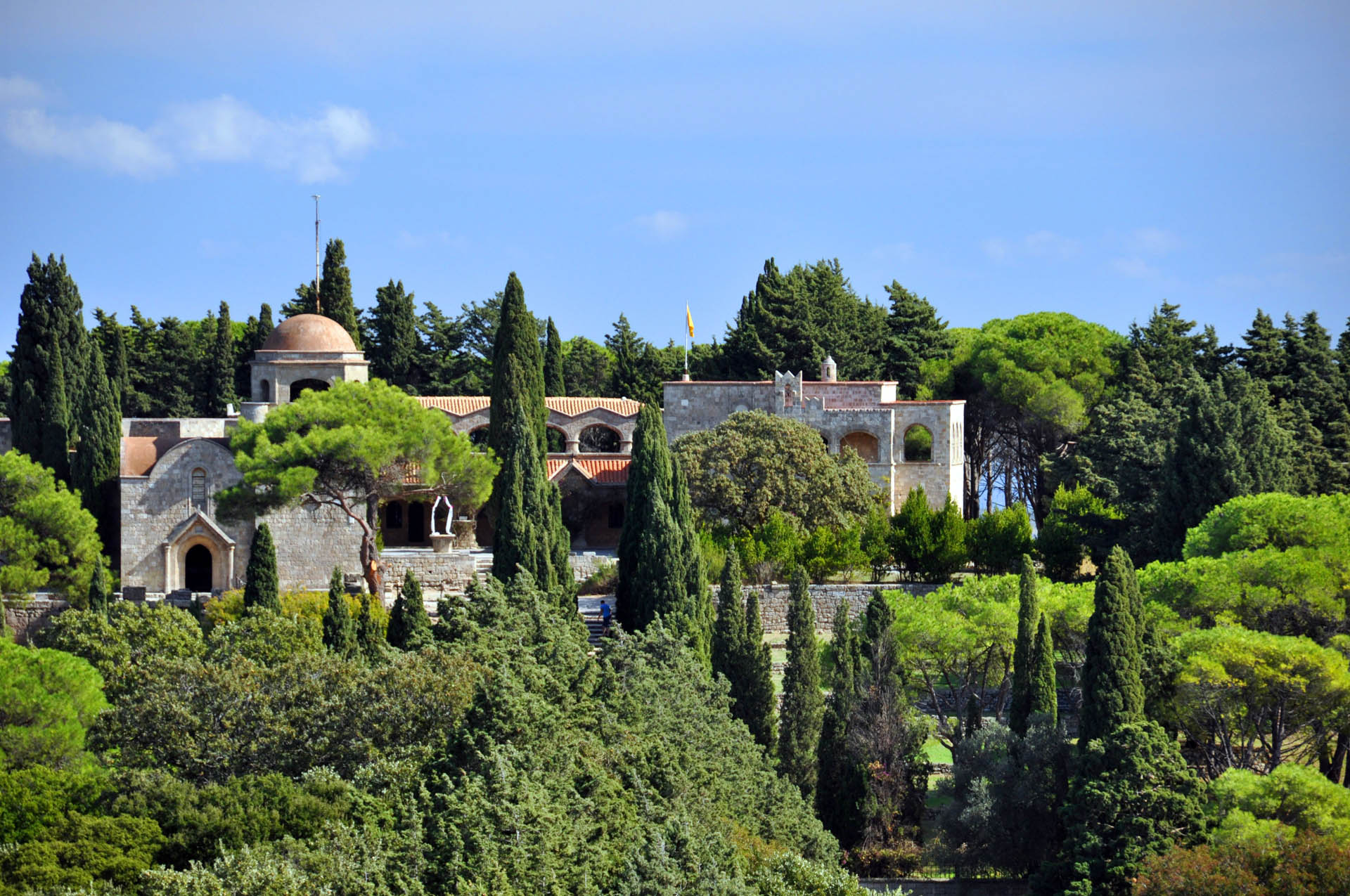 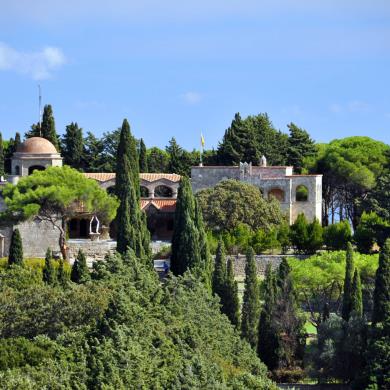