Archaeological site, Cultural heritage
Address: 85100 KAMIROS , RHODES , GREECE
URL: http://odysseus.culture.gr/h/3/eh351.jsp...
The district of Kameiros stretches along the northwest coast of the island close to the Cape of Ayios Minas (ancient Mylantion) in the foothills of Mt Akramytis. In prehistoric times the Mylantian gods, who taught mankind milling and kneading, were worshipped here. Mycenaean necropoleis have been excavated at Kalamvarda, west of Kameiros. Finds from the Geometric period (8th c. BC) testify to the existence of a temple dedicated to Athena on the Acropolis. The earthquake of 226 BC destroyed the Classical city and probably the Classical temple of Athena Kameiras. The Hellenistic city was built on three levels according to the Hippodamian system. On the summit of the hill was the Acropolis with the Temple of Athena and the Stoa. On the middle terrace was the settlement and lower down the Hellenistic temple, Doric Fountain-house, Agora and Peribolos of the Altars. The area was embellished with numerous votive offerings, stelai and plinths with statues. The earthquake of 142 BC destroyed the city for the second time.
The Acropolis was first excavated by Biliotti and Salzmann in the last century (1852-1864). In 1928 during the Italian occupation of the island, the Italian Archaeological School began a systematic excavation of the area along with restoration work which continued until the end of the 2nd World War.
The archaeological area of Kameiros comprises the settlement, which was built on three levels, with the following monuments:
Acropolis and Precinct of Athena Kameiras. The Doric temple, a tetrastyle peripteral (with porticos on all four sides), was surrounded by a peribolos. It replaced a previous Classical temple which was destroyed by the earthquake of 226 BC. Only its foundation has survived.
Archaic cistern. A rectangular construction lined with plaster. Terra-cotta pipes and two apertures with stone covers on the bottom served to carry the water to the settlement. It had a capacity of 600 cubic metres of water, a reserve sufficient for 300-400 families. Steps on the sides facilitated access to clean the reservoir, which was covered. It dates to the 6th-5th c. BC. In the Hellenistic period its place was taken by a stoa, which put it out of use.
Hellenistic Stoa. This consisted of two rows of Doric columns and shops or lodgings at the rear for the worshippers. The columns at the front supported an architrave with metopes, triglyphs and a cornice (3rd-2nd c. BC). There was an impressive water supply system under the floor with wells (with covers, according to an inscription), subterranean tanks and terra-cotta water pipes, which replaced the earlier reservoir.
The City of the Hellenistic and Roman periods. Built according to the Hippodamian system (with a grid of parallel streets and residential blocks of the same size, called insulae), it spread over the middle terrace of the hill. A principal feature of the houses was the interior colonnaded courtyard with one side usually higher than the others (Rhodian peristyle). They were adorned with mosaic floors and facades with architraves and painted decoration on plaster. Among them are the remains of public baths with hot and cold chambers and hypocausts (underfloor installations for heating the rooms).
Hellenistic temple on the third and lowest terrace of the archaeological zone. It was a poros distyle temple (having two columns in antis at the front), with a pronaos, cella and opisthodomos. The base of the cult statue is preserved in the cella and behind was the treasury, a pit cut into the floor to hold the temple money. It was probably dedicated to Pythian Apollo.
Ionic Naiskos of poros stone with plaster facing, used to house votive offerings.
Fountain-house. The facade consists of poros Doric half-columns faced with plaster and supporting an entablature. Panels closed the intermediate spaces. Inside it was an open tank from which the water was drawn (mid-4th c. BC). At a later period (3rd c. BC) the tank was replaced by a well and the columns were carved with the names of the damiourgoi (eponymous priests of ancient Kameiros). Behind the fountain-house the remains of a stoa can be see. A revetment wall on three sides retained the earth fill of the upper terrace.
The "Sacred Agora" a four-sided square opened in front of the fountain-house, where the citizens forgathered for religious ceremonies. It had three steps on the south and east sides. Walls later enclosed the north and south sides, in which were doors to admit the faithful. Half-columns embellished the north wall, and at the southeast corner there was a four-sided structure, perhaps a votive offering. The inscribed plinths on the stairs at the south side are later reconstructions by the Italians. Inscribed bases for statues and votive offerings were erected on the west side. The most important of the votive offerings was that of Panaitios, with the inscription "ΘΕΟΙΣ ΠΑΣΙ" - "to all the gods". There are two half-finished inscribed votive offerings behind the north entrance to the Agora, one of them probably depicting a bull.
The Gods' sanctuary. On the northeast side of the third terrace, along the retaining wall, were erected inscribed altars, on two levels, dedicated to different deities (Agathos Daemon, Artemis, Zeus, Poseidon and others). There are remains of a large oblong altar dedicated to Helios on the first level. A semicircular dais in front of the Peribolos of the Altars carried a votive offering. A monumental staircase between the Agora and the Peribolos of the Altars led to the residential centre. 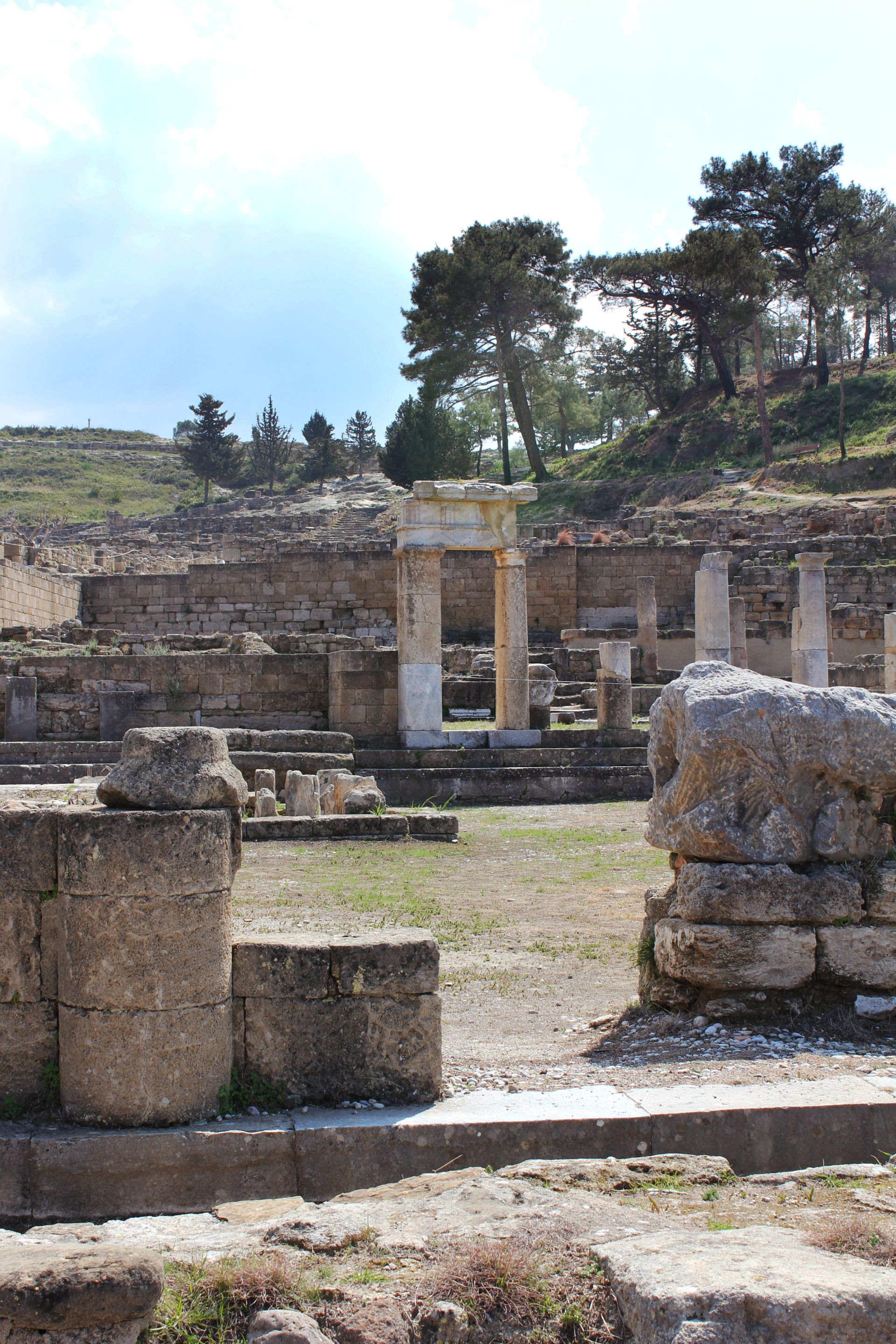 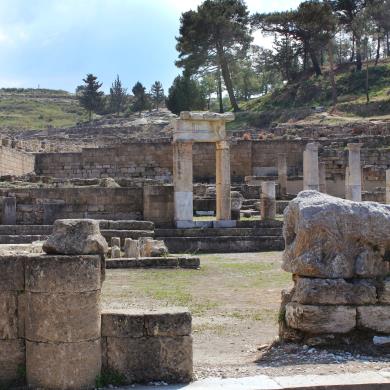 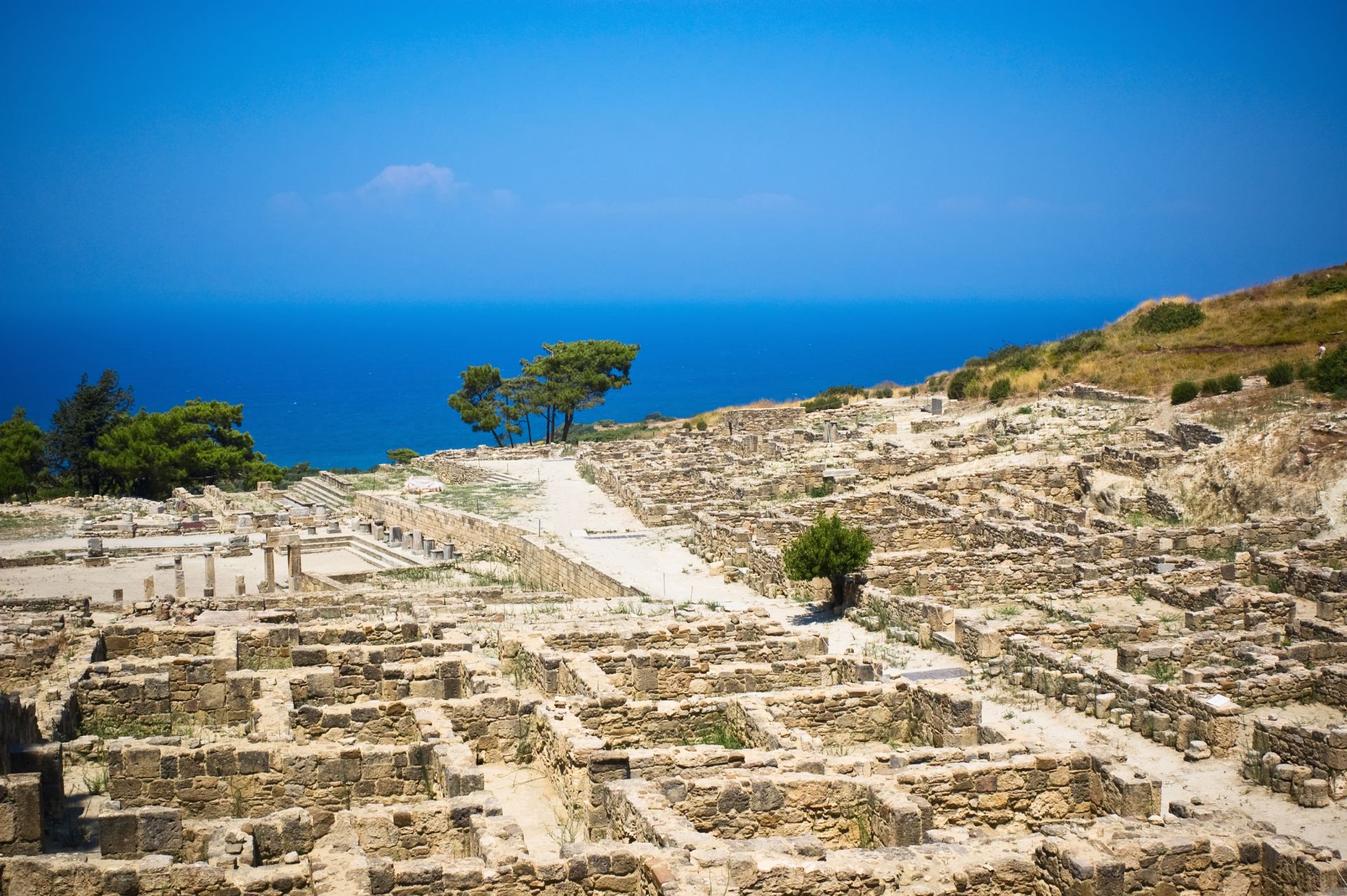 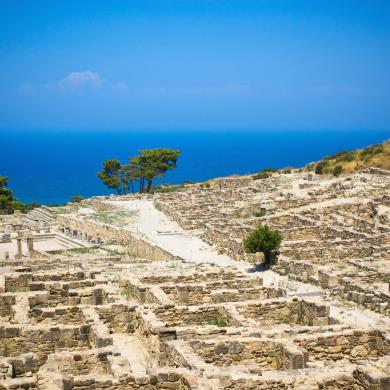 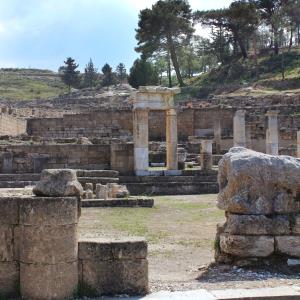