The Rack Railway starts from Diakopto’s railway station and passes through the Gorge of Vouraikos. Travelling a distance of 22,350 meters in 60 minutes, lead to the Kalavryta town, at an altitude of 750 meters above sea level.

The decision of rack railway construction was made of Charilaos Trikoupis government, under the grand project of connecting by railway all of Greece. Trikoupis’ friend and local politician Asimakis Fotilas supported this work. Charilaos Trikoupis promoted the small-scale lines because he saw that the "small" train has greater flexibility, a big qualification for a mountainous country, but also was more economical to manufacture.

A French company with Italian craftsmen’s assistant, who had acquired great experience in similar projects in the Alps, built the line. The construction of the network began in 1889 and was done in 1895. Rack railway was inaugurated on March 10, 1896, involving King’s presentation.

The first locomotive was steam mobile and at each stop there were water towers for the replenishment of water.

Since then Rack Railway travels every day, all year round.

Diakopto is 22 km far away from Kalavryta, the journey takes one hour and the train’s speed varies from 30 to 40 km/h on a simple line, and 6 to 15 km/h on toothed parts. The incline of the line does not allow the use of a conventional train, so between the rails was established a jagged line that allows, with a special mechanism function, to get on Kalavryta town, at an altitude of 750 meters, beginning from the sea level. It has the smallest rail width in Europe (0,75 m). Today the train, which is consisted of two small wagons and a diesel-electrical move unit, starting from Diakopto climbs to Kalavryta, passing at the first the normal track and continues by "pulling" its teeth, entering the first close part of the gorge and stop at the village Niamata. The train named Rack passes through small tunnels, where, between small openings, could someone see, on the opposite bank, a large rocks covert with successive cavernous areas. In one of them stalagmites have formed upright columns resembling lined forms synthesized court (Judge, President and Prosecutor). The Rack picks up his "teeth" when reaches at the Triklion stop. The way passes through wild landscapes with waterfalls and reaches the narrowest point of the journey called "Doors", where the train passes through a tunnel. Going up, the Rack "reveals" again his teeth and reaches the station of the Mega Spileon, which is located in the village of Kato Zachlorou. Continuing now on the normal path towards Kalavryta, speeds passing the Kerpini stop and reach Kalavryta through the plains.

Next to the train rails there is a path that previously was used by local residents, and today the same track is marked as the European path E4 used by Greek & foreign hikers. To download the path takes about 6 hours and uploading it around 7-8 hours.

Here, on the May’s third Sunday, every year, is organized by the Alpine, Ski & Climbing Club of Kalavryta, the Greek Passage involving hundreds of climbers and hikers. 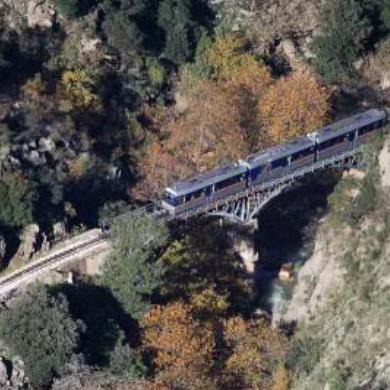 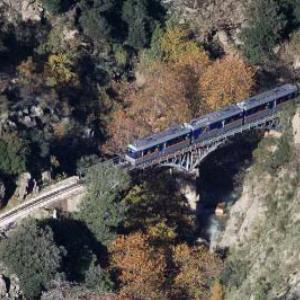